After two years of collaboration between a group of teachers at the BSSS, and the United Ngunnawal Elders Council, we are excited to announce that Dickson College has launched a ground-breaking exciting new course offering for students; the Indigenous Language and Culture major.

The course is brought to life by Elinor Archer, an educator and Indigenous Contact Officer at Dickson College, along with her 23 students of both Aboriginal and non-Indigenous backgrounds.

Nearly a semester in, the course has already had a profound impact for those involved – for some students, it’s the first time they’ve seen their culture and language recognised in the curriculum and they take great pride in sharing this with their peers - for others, it provides the opportunity to explore the world’s oldest surviving culture and gain an Aboriginal perspective of our history that they previously hadn’t had access to.

“Some of my kids are really culturally strong, they have language in their family and they live with elders. For others it’s been an introduction, and as soon as they learnt a little bit, they became passionate about learning and exploring more,” said Elinor.

The class is visited by a different community guest speaker each Friday and so far, has seen students engage with 12 different Aboriginal and Torres strait Islander guest speakers, including Ngunnawal elders to start and finish each term.

“Each speaker brings something different to the class, some have led outdoor yarning circles, walks on country or interactive interviews. Aboriginal and Torres Strait Islander people have different perspectives, different language, different culture; each guest speaker had a unique impact and prompted new questions from the kids,” said Elinor.

For the student’s major work, they’re tasked with retelling an Aboriginal story from their own personal perspective.

“One student created a beautiful painting of Don Bemrose on stage, performing through a broken window; she spoke about the different layers in his story, about being from different minority groups as a proud, gay, Aboriginal man and she shared her finished piece with him. It was such a special moment.” 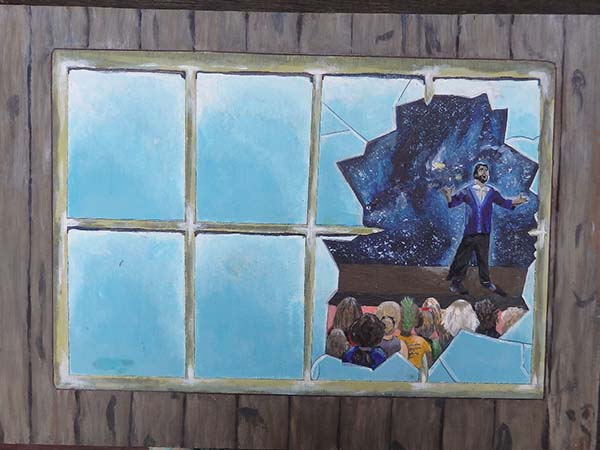 Above: Artwork by Grace Lloyd, year 12

Yesterday was the last day of National Reconciliation Week for 2020 and the anniversary of Mabo Day. Elinor reflected on the meaning of reconciliation for Australians.

“Reconciliation Week is an opportunity for the non-Indigenous population of Australia to listen, learn and unite in taking action. With everything that’s happening now, this year’s theme really resonates; We’re in this together.”

With access to the new course, students can engage with recognition and learning of Aboriginal and Torres Strait Islander culture, language and history throughout their college experience. The unit has been engaging for the students and even maintained almost 100 percent attendance during the remote learning period.

The course is the first of its kind in the ACT, and Elinor hopes that in future years, it will be more widely available for all students.

“My long-term hope is that every kid would get to do this as one of their majors. We have mandatory English in the ACT; I would love to see this also become a mandatory class.”

“It’s been amazing. I feel so honoured to teach this course.”