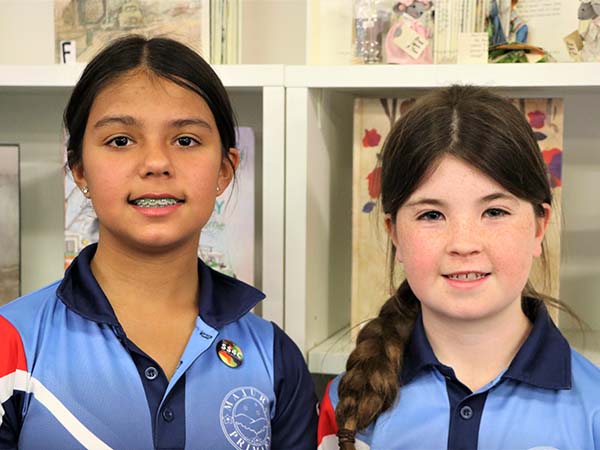 Students from several ACT Public Schools have taken a lead role in organising and speaking at the recent School Strike 4 Action.

Majura Primary School students Arianne and Alison where the youngest members of the School Strike 4 Action Organising Committee which also included Dickson College students Matilda and Aoibhinn, who have been working since May organising volunteers, promotion and event logistics for last week’s strike.

“My grandparents were the ones to first teach me about climate change and they inspired me to get involved in this movement,” said Arianne.

“They live in Sri Lanka, which is an island that will be hugely impacted if sea levels continue to rise, so when I heard about the strike, I knew I had to do everything I could to be involved and take action,” she said.

The Year Six students feel they have gained valuable skills from the experience that will serve them as they move through their lives.

“I used to be quite afraid of public speaking, but after speaking with Arianne in front of 15,000 people at the strike, I feel more confident to do other things like talking in front of my class, now know I can do anything,” said Alison.

Dickson College students Matilda and Aoibhinn view their activism in the climate action space and specifically their work in organising the strike, as a natural extension of their science, mathematics and civics learning at school.

“The whole point of learning about these issues, in fact the broader purpose of education, is to prepare us to be informed and active citizens, so it makes sense that we would want to put all of that into action for issues that we are passionate about,” said Aoibhinn.

“I am passionate about this issue, I always have been, and activism is what I want to do in my life,” she said.

The Year 12 students agreed that the experience of working with a diverse range of students from across Canberra as well as adult participants including speakers, unions and the media has taught them time management and communication skills.

“It can be a challenge to juggle all my responsibilities, but I feel it’s important to volunteer your time towards issues you believe in, that’s how positive change is made,” said Matilda.

“Whilst we see this as being a human issue rather than a divisive political issue, being engaged in this event has taught us to clearly articulate our views, how to have difficult conversations with others and how to respectfully disagree,” she said.

“Caring for Country has always been a really big part of who I am, so having the opportunity to talk about how First Nations people care for Country and how climate change impacts our ability to do that was really important to me,” said Dhani.