APPENDIX 1: A5 Management Discussion and Analysis

The Department of Education and Training (the Department) works in partnership with the community to provide sustainable, high quality school education and training services to meet the needs of the people of Canberra.

Through these services the Department aims to improve learning and employment outcomes for all students and trainees.

The development of the Department's annual Strategic Risk Management and Audit Plan identified risks that could impact on departmental operations and objectives. New national education initiatives have escalated the priority of some risks, while other medium to long-term risks continue to require ongoing monitoring and attention by the Department's executive and senior management.

There has been no significant change in the accounting standards applicable to the Department's 2009-10 financial statements.

Table A5.1 provides the financial information based on audited financial statements for 2008-09 and 2009-10.

Table A5.1: Net cost of services

Net cost of services for the Department in 2009-10 has increased by $3.0 million or 0.6 percent from the Budget primarily due to increased enrolment and complexity associated with students with a disability and a two percent increase in general school enrolment in 2010. This has been offset by lower depreciation and the timing of payments associated with vocational education and training grants and purchased services.

In comparison to 2008-09, net cost of services increased by $22.2 million or 4.5 percent mainly due to additional funding provided for budget initiatives, increased depreciation associated with higher levels of capital works activities and issues identified above. The decrease in operating deficit over the budget primarily related to lower than anticipated depreciation and the timing of expenditure associated with Commonwealth funded vocational education and training grants and purchased services.

The reduction in operating deficit from the same period last year was mainly due to one- off increased expenses associated with the change in accounting estimates for employee liabilities in 2008-09 offset by increased depreciation costs.

In 2009-10 revenue totalled $508.7 million. There has been an increase in the revenue over the budget by $6.2 million or 1.2 percent. This is $29.5 million or 6 percent higher than the corresponding period last year. The Department receives 93 percent of funding through Government Payments for Outputs (GPO) as illustrated in the graph in Figure A5.2. 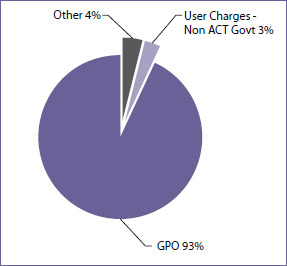 Higher than anticipated revenue of $6.2 million over the budget primarily related to increased funding for students with a disability, enrolments and superannuation.

The increase from 2008-09 primarily related to additional funding provided for budget initiatives, wages and salary increases and increased Commonwealth funding. 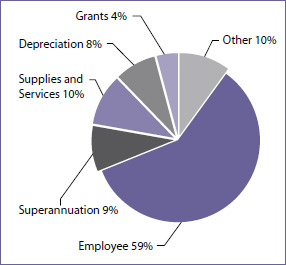 The Department held 97.2 percent of its assets in property, plant and equipment, and 2.8 percent related to cash and cash equivalents, receivables and other current assets. 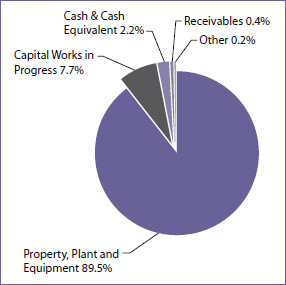 Assets totalled $1,659.9 million at the end of 30 June 2010. This was $6.2 million lower than the budget primarily due to the deferral of capital works activities to 2010-11, partly offset by increased cash associated with Commonwealth specific projects.

Total assets increased by $167.2 million compared to the previous year primarily due to increased capital works activities, of which $86.5 million relates to the ‘Building the Education Revolution Program', and an increase in plant and equipment partially offset by depreciation.

Figure A5.5 indicates that the majority of the Department's liabilities relate to employee benefits (84.9%) and payables (11%). 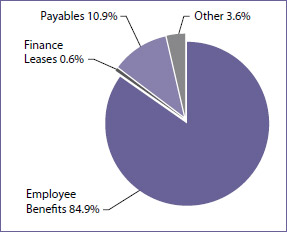 The Department's liabilities, for the year ended 30 June 2010, of $110.9 million were $17.0 million higher than the 2009-10 budget of $93.9 million. This was largely due to the flow on impact from the 2008-09 change in accounting estimates for employee liabilities and higher than anticipated payables associated with capital works.

Total income received includes Revenue for Expenses on Behalf of the Territory, primarily for the provision of grants to non-government schools, and fees from training and regulatory services.

In 2009-10, Territorial revenue totalled $225.7 million, a decrease of $5.8 million or 3 percent from the 2009-10 budget. The lower than anticipated revenue primarily related to Commonwealth Grants for non-government schools.

In comparison to 2008-09, total revenue reduced by $94.5 million or 30 percent mainly due to receipt of Commonwealth Grants by the Department of Treasury from 1 January 2009 offset by increased recurrent funding for non-government schools.

The decrease from the budget primarily related to lower than anticipated Commonwealth grants for non-government schools.

Increased grants expenditure of $53.5 million or 31 percent over the previous year is due to increased Commonwealth grants for non-government schools associated with the Building the Education Revolution Program.