In January 2010 the Department launched its new Strategic Plan 2010 – 2013: Everyone matters . The Strategic Plan provides direction to the Department, and its clients and stakeholders, on key priorities. Specifically, the plan details four priorities: learning and teaching, school environment, student pathways and transitions, and leadership and corporate development.

The performance indicators under those priorities will allow for progress against them to be measured over time. Already, good progress has been shown in a number of areas:

Increasingly, year 12 or equivalent attainment is being recognised as a strong enabler of student participation in economic and social activities. It is one of the three strategic targets of the Council of Australian Governments (COAG), of which the ACT Government is a signatory, as part of its education  reform in Australia.

Historically, the ACT has the highest proportion of year 12 attainment in Australia. As a result, the targets set in the COAG agreements are higher for the ACT (to reach 95% by 2015) than they are for other jurisdictions (90% by 2015).

Figure A2.1: Proportion of young people aged 20-24 who have attained a Year 12 Certificate or equivalent or Certificate II or above 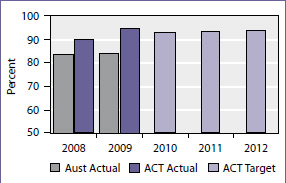 Source: Australian Bureau of Statistics, Survey of Education and Work 2009

Figure A2.2: Percentage of year 12 public school students who received a Year 12 Certificate Attendance at school is essential for learning and for enabling students to benefit from the full range of educational programs offered at school.

The attendance rate of public school students from years 1 to 10 was 91.4 percent in 2009 compared with 91.7 percent in 2008, a marginal decline (Figure A2.3). The Department, through a new school improvement framework, is setting in place strategies to increase the engagement of students, particularly  at high school and college.

Figure A2.3: School attendance in public schools, years 1 to 10 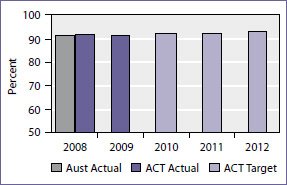 Satisfaction of public school students is an important indicator of student engagement and as a result impacts on educational outcomes. In 2009, overall student satisfaction (across primary, high and college sectors) with the quality of the education received at public schools was 80 percent (Figure  A2.4). This rate is not comparable with 2008 due to changes in the survey methodology. There is no nationally consistent comparative data.

Figure A2.4: Overall student satisfaction with the education at their public school 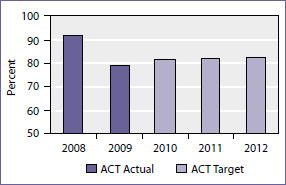 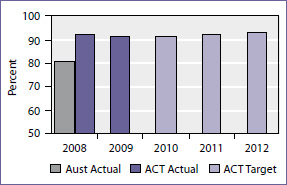 'To ensure that the Department is recognised as a responsive, innovative and high achieving organisation that delivers on its commitments'

The satisfaction of parents and carers with education in public schools shows the confidence of stakeholders in the educational policies and performance of the Department. Figure A2.6 indicates that the Department enjoyed a high level of parent and carer satisfaction in 2009 (85%). This rate is not  comparable with 2008 due to changes in the survey methodology. There is no nationally consistent comparative data.

Figure A2.6: Overall satisfaction of parents and carers with the education provided at their public school Staff retention is an indicator of the health of an organisation. The Department has historically maintained a high staff retention rate with 93 percent for 2009 (Figure A2.7). This indicates staff satisfaction with management and a commitment to achieving corporate goals; where a collaborative organisational  culture is fostered; innovation is encouraged; and achievements are acknowledged. There is no nationally consistent comparative data. 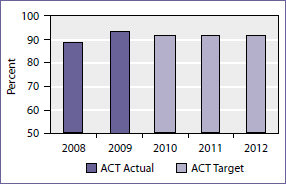 The Department's Strategic Plan was released in December 2009 and articulates our vision and priorities for the next four years.

The Strategic Plan gives focus to the education and training priorities in the ACT Government's overarching direction-setting document, The Canberra Plan: Towards Our Second Century

(The Canberra Plan), and the associated underpinning plans: the Social, Spatial, Economic and Climate plans. The Department's Strategic Plan provides a platform for achievement against these important government objectives.

In turn, the Strategic Plan is underpinned by key organisational planning documents. The work program over the period 2010-11 is articulated in the Operational Plan.

School planning processes are guided by the Department's School Improvement in ACT Public Schools: Directions 2010—2013.   These directions were launched in 2010 following the release of the Strategic Plan. School plans, endorsed by school boards, are prepared annually and published on school websites.

The hierarchy of the Department's planning framework is presented in Figure A2.8. 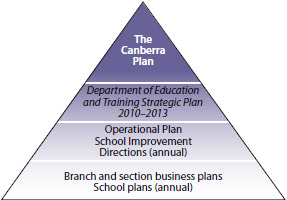 The Department has a number of internal controls designed to monitor and manage risk involved in delivering against the Strategic Plan. The Internal Audit Program and the Risk Management Framework are the primary risk management tools used to manage, monitor and report on the Department's risk management and audit functions. The 2009-2010 Risk Management and Audit Plan was endorsed in June 2009.

More information on the Department's risk management and audit program is provided in section C1.

The Canberra Plan places the ACT school system in a forward-looking context. With 'excellent education, quality teaching and skills development' being one of the plan's seven strategic themes the Department is an integral player in achieving the city's overall vision to be both sustainable and creative.

We operate in a city with a constantly changing profile. Geographically we are small in size and our urban nature is almost entirely metropolitan. Our location within the state of NSW creates opportunities for partnership and at times presents various cross-border issues.

Underpinning our desire to be a sustainable and creative city is a need to also be a clever city, with a well educated and appropriately skilled workforce. Of those citizens between the ages of 25 and 64 almost three-quarters (71%) have a post school qualification, which is well above the national  average of 59 percent.

Canberra's status as the nation's capital adds a significant international flavour with our educational institutions delivering services to over 7,000 foreign students in any one year.

Through the National Education Agreement and associated National Partnerships the Department works closely with the Australian Government Department of Education, Employment and Workplace Relations to translate and implement national policy into local practice. The creation of the Australian Curriculum,  Assessment and Reporting Authority (ACARA) has fulfilled an important role in the development of a national approach to curriculum and assessment. The Department has a very good working relationship with ACARA.

requires that each public school has a school board as a way of sharing authority between  the Department, the school and the local school community.

The role of boards includes establishing the strategic direction and priorities for the school and developing relationships between the school and the community.

The Department works closely with other ACT government agencies to deliver on its priorities.

To deliver full service programs related to early childhood development, education and care the Department has worked with the ACT Department of Health and the ACT Department of Disability, Housing and Community Services. Amongst other outcomes this has led to the opening of Child and Family Centres  and expanded the Maternal and Child Health visiting program.

To support the improvement of student transitions through the school system and beyond, the Department has collaborated with the Canberra Institute of Technology. Amongst other outcomes this has delivered innovations such as the incorporation of Flexible Learning Centres in the new Gungahlin College.

To plan for future schooling needs and advise on appropriate use of land adjacent to school environments the Department maintains a close working relationship with the ACT Planning and Land Authority. This has supported the implementation of the school renewal program that has delivered new schools  and colleges with state of the art technologies, linked to the public library service and serving a range of other community needs.

Where there are opportunities for collaboration the Department seeks to work with other jurisdictions to deliver benefits to the ACT. Through service agreements and memorandums of understandings the ACT has negotiated arrangements addressing the curriculum, assessment and professional development needs  of its teaching workforce. In particular, the Department has an arrangement with the NSW Department of Education for the delivery of National Assessment Program – Literacy and Numeracy testing to all ACT students.

The appointment of a new leadership team during 2009-10 provided a driver for renewal and organisation change.

Dr Jim Watterston took up the position as Chief Executive in July 2009. Prior to his appointment, Dr Watterston was the Regional Director of the Victorian Department of Education and Early Childhood Development's Eastern Metropolitan Region; a diverse and high-performing educational jurisdiction comprising  250 secondary, primary and special schools. Formerly he was Director of Schools in the West Coast Education District of Western Australia and previously, for about 14 years, a secondary and primary school teacher.

Ms Diane Joseph commenced as Deputy Chief Executive on 11 January 2010. Ms Joseph was previously the General Manager, Innovation and Next Practice Division in the Victorian Department for Education and Early Childhood Development. While working in Victoria, Ms Joseph made a significant contribution  to the Victorian reform agenda in the area of senior school pathways and provision of vocational education and training.

Ms Joseph was previously an Assistant Regional Director, and has over 10 years experience as a secondary school principal, as well as many years teaching. In 2005, she received the Victorian Education Excellence Award for Outstanding School Leadership in recognition of her contribution to state education.

Ms Leanne Cover commenced in the organisation as Executive Director, Tertiary and International Education Division in January 2010. Ms Cover has been a leader in the Vocational Education and Training ( VET ) sector for the past 13 years. She has held numerous senior management positions including,  most recently, Executive Director Governance and Organisational Capability at the Canberra Institute of Technology.

In January 2010, the Department's organisational structure was reconfigured to better reflect its priorities and provide strong leadership in respect of its core priorities. Central to this rearrangement was the establishment of a dedicated School Improvement Division. The new School Improvement Division  reflects a commitment to developing and improving teacher quality.