The Human Rights Act 2004 commenced operation on 1 July 2004. Since then public officials have been required to interpret agency-relevant legislation consistently with human rights unless the Territory law clearly authorises otherwise.

Amendments to this Act were introduced on 1 January 2009 and provided individuals with the right of action where human rights have been breached by a government agency.

In May 2010, the Australian Human Rights Commission provided the Department with a new educational resource in the form of a DVD for schools. This resource aims to develop critical awareness in students of human rights and responsibilities. The package promotes the attitudes, behaviours and skills which students can apply to everyday life.

The resource is available on the Commission’s website at http://www.humanrights.gov.au

The Department consults with the ACT Human Rights Commission in the preparation of cabinet submissions, including government submissions to Legislative Assembly Committee inquiries and in the development of new and amended legislation.
The ACT Human Rights Commission was also consulted on significant departmental issues including: realignment of the Black Mountain School leaving age; feasibility of implementing the student vote model in the ACT; and the 2009-10 review of special education.

The Human Rights and Discrimination Commissioner, the Children and Young People’s Commissioner and the Commissioner for Disability and Community Services were consulted in changes to the composition of the school boards at the Woden and Black Mountain schools. All three Commissioners provided feedback to the Department and acknowledged that the proposed changes were consistent with the requirements for reasonable adjustment.

Changes to the structure and composition of school boards requiring legislative amendment in 2009 were completed in accordance with human rights and equity principles.

Prior to commencing any policy review or development a scoping meeting is held to ensure requirements of the Human Rights Act 2004 are met.

During 2009-10, there were changes to student participation requirements and suspension provisions under the Education Act 2004. Changes have also affected child protection provisions under the Children and Young People Act 2008. In response the Department has consulted with the ACT Human Rights Commission and is developing or transitioning its suite of policies which include:

In a show of support for, and acknowledgement of, human rights the Department provided support to Oxfam Australia’s Refugee Realities Project, which took place in Commonwealth Park from 7 to 20
June 2010.

Complaints to the Human Rights Commission are reported in section B2 of this report.

Indigo Philip from Kingsford Smith School and Isha Hekkert Menon from Lyneham High School have managed to merge human rights issues with their creative ability and skills. These two talented 13 year-olds were the winners of the 2010 ACT Human Rights Commission Annual Art Award. The theme was “Disability: inclusion through Friendship.” Students were asked to represent the many ways young people can include people with a disability in their friendship group. 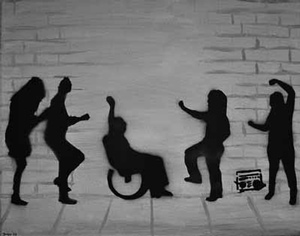 Discussing her work Everyone Rocks Indigo states: My painting is about inclusion through music and dance. It is about five friends dancing and singing through the streets, rocking on. 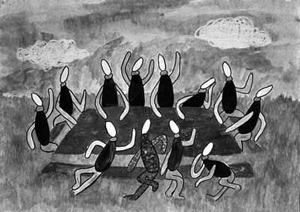 Isha talks about The Picnic: My artwork depicts in an abstract form a picnic of people, one of them is disabled. I have depicted the person with the disability as the colourful “special” person in the midst of normal “dull” people. This artwork should show that people with disabilities are just like us, only more special. We must treat them as we treat other people.