As part of its ongoing commitment to good governance and sound records management, the Department continued to meet its responsibilities under the Territory Records Act 2002 and related standards.

In 2009, the Department commenced a program of sentencing and disposal of records in line with the requirements of the Territory Records Act 2002 and the Records Disposal Schedules 16.1. The program began with the disposal of 90,000 student records from the 1950s to 1980s that had reached the end of their legislative retention period.

The Department will continue to dispose of student and administrative records to improve capacity to store and manage records.

All new files are now assigned a retention period and titled according to the Department’s Thesaurus, allowing the Department to put in place further improvements in the management of records over coming years.

Following the Auditor-General’s performance audit into records management in 2008 the Department reviewed the risks involved in protecting and preserving records stored by the Department, resulting in the following actions:

The Department continues to identify and preserve records containing information that may allow people to establish links with their Aboriginal and Torres Strait Islander heritage.

Since July 2008, the Access to Records provisions of the Territory Records Act 2002 has provided public access to records older than 20 years. Departmental records that fall within this period have been identified and assessed. Exemptions for some records were sought to protect the privacy of individuals.

To assist the community with enquiries for access to older records the Department, in concert with other departments, funds a reference archivist.

Requests are lodged with Archives ACT through a website and records viewed in joint- funded facilities within the Woden Library. Within the reporting period the Department responded to eight public access requests.

Source: Department of Education and Training

The theme for Information Awareness Month this year was ‘Access across the Generations’. The Department contributed a display of Everyone matters at Archives ACT at the Woden Public Library.

The display included an impressive paper quilt designed by Paull McKee, a local textile artist and Records Management employee. The quilt was made from colour paper copies of covered class rolls and their contents across the decades.

This work explored the changes in generations through the design of the decorative 1960s, 70s and 80s contact and wrapping papers used by teachers to cover class rolls. It took about a week to complete.

Trophies, plaques, admission registers and photographs from the Department’s archive were also displayed as part of the information awareness month celebrations. 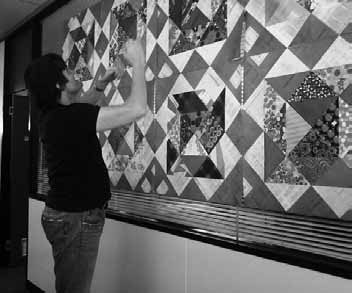