Our performance in summary

Our performance is discussed in more detail in Sections A8, A9, B and C.

The Directorate's vision, priorities and performance measures are expressed in the Strategic Plan 2010-2013: Everyone matters. Priorities in the Strategic Plan are derived from the higher level education and training objectives contained in The Canberra Plan: Towards Our Second Century and the associated underpinning plans. The Canberra Plan provides a basis for achievement against these important government objectives. The hierarchy of the Directorate's planning framework is presented in Figure A2.1. 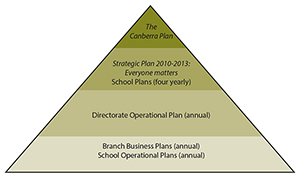 Our Strategic Plan is underpinned by key organisational planning documents. The work program for the period 2012-13 was contained in the operational plans for 2012 and 2013 which provided details of key priorities and activities for the Directorate for each of the calendar years.

More information on the Directorate's governance arrangements, including risk management and the audit program, is provided at Sections C1 to C5.

The work of the Directorate is aligned with the Canberra Plan: Towards Our Second Century which places the ACT school system in a forward looking context. With one of the plan's seven strategic themes being 'excellent education, quality teaching and skills development', the Directorate's role is integral to achieving the Canberra Plan's overall vision. 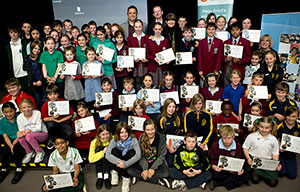 The ACT is the first education jurisdiction in Australia to introduce the Fred Hollows Awards program into schools. The Award encourages primary school students to follow in the late humanitarian's footsteps by making positive contributions at school and in their community.

The founding director of the Fred Hollows Foundation, Gabi Hollows, joined the ACT Minister for Education and Training, Dr Chris Bourke MLA for a special presentation ceremony on Wednesday 29 August 2012.

Ms Hollows congratulated 240 primary school students from across the ACT for the contribution they made to the life of their school and community throughout 2012. Dr Bourke acknowledged the Fred Hollows Foundation for the important role it has played in improving communities across Australia.

The Directorate continued to work with the Australian Government through the National Education Agreement, the National Agreement for Skills and Workforce Development, the National Quality Framework on Early Childhood Education and Care and associated national partnerships in implementing national policy within local practice. In particular, the Directorate maintained strong working relationships with the Department of Education, Employment and Workplace Relations and the Department of Industry, Innovation, Science, Research and Tertiary Education.

Initiatives under the National Partnership Agreement on Skills Reform commenced in earnest following the endorsement of the ACT Implementation Plan by the Commonwealth in December 2012. This plan will guide reforms in the VET sector for the next four years. The four key areas of reform under the Agreement are quality, transparency, access and equity, and efficiency. The implementation plan illustrates that objectives of the National Partnership align with goals of the ACT population through high quality training through a well-regulated training sector.

In May 2013 the ACT Government signed an agreement with the Australian Government to move to the next phase of education reform in the ACT. The National Education Reform Agreement incorporates the National Plan for School Improvement and includes both national and local initiatives to improve educational outcomes for children and young people.

The Directorate maintained strong collaborative relationships with a number of national and local organisations supporting the delivery of education and training. The Directorate worked with the Australian Curriculum, Assessment and Reporting Authority in the further development of the Australian Curriculum, in the development of standards and reporting for student achievement and in the administration of national assessment and reporting programs.

The Directorate supported the work of the ACT Teacher Quality Institute and the Australian Institute for Teaching and School Leadership to raise the standard of the teaching profession in the ACT and strengthen the quality and sustainability of the teaching workforce.

Close working relationships were maintained with a number of national authorities and regulators, to ensure high standards of education and training in the ACT. The Australian Skills Quality Authority (ASQA) is the national regulator for the vocational education and training sector. ASQA regulates courses and training providers to ensure nationally approved quality standards are met. The Australian Children's Education and Care Quality Authority (ACECQA) has a national role to ensure that the National Quality Framework on Early Childhood Education and Care is implemented consistently and reliably, and worked with the Directorate as the local regulator on this basis.

In 2012-13, the Directorate continued to work closely with the ACT Board of Senior Secondary Studies, the authority responsible for the development of policy to ensure certification of senior secondary school studies in public and non-government schools in the ACT.

To enhance the likelihood of successful student transitions through the school system and beyond, the Directorate has developed strong links with the Canberra Institute of Technology (CIT), the Australian National University (ANU), the Australian Catholic University and the University of Canberra (UC). Collaboration with CIT delivered innovations such as the incorporation of Flexible Learning Centres in Gungahlin College. The ANU Secondary College program is a collaboration between the Directorate and the ANU to provide an enhanced learning experience for year 11 and year 12 students in ACT schools and colleges. In 2012 and 2013 courses were provided in Conservation Biology, Chemistry, Japanese, Specialist Mathematics and Physics. From 2014 the ANU Extension Program will offer secondary students the opportunity to enrol in an ANU academic award program that will articulate into their tertiary studies. Luke Wray's passion and dedication for tiling is obvious and he attributes much of his success to his mentors and trainers, most of whom he works with.

When he completed year 10, Luke realised that higher education was not the right choice for him, and with that decision in mind, he set out to land himself an apprenticeship. His initial choice was to take the path of building and construction, however circumstances led him down a different path and he secured a tiling apprenticeship.

Luke's decision to take on a career in tiling is one he has never looked back on, "it is satisfying to know that I am learning a unique skill. Every day I am doing something different, be it designing, using different skills, meeting new clients… it always makes for a very diverse and interesting day and it keeps me motivated," says Luke.

Similarly, the UC Accelerate Program (UCAP), an initiative of the UC Schools Collaboration Partnership, provides opportunities to extend advanced year 11 and year 12 ACT students. In 2012 the program delivered the first two of its planned suite of courses. These courses were in Accounting and Design Foundation. The joint Steering Committee approved funding for another four courses to be developed in 2012, for delivery through UCAP in 2013. These courses were Creative Writing, Information Technology, Economics and Discrete Mathematics, with UC planning to offer four more courses in 2013.

The partnership between the Directorate and UC has provided professional learning and practice opportunities at the University of Canberra High School Kaleen and the University of Canberra Senior Secondary College Lake Ginninderra. Through this partnership, pre-service teachers have access to the classroom environment to develop their teaching skills. Similarly, teachers and students from the school and the college have access to the University's learning environment and resources. These opportunities have ranged across health, youth and justice studies, speech pathology and other professional areas.

Our close proximity to regional NSW provides opportunities for efficient service delivery to the wider community. The 2011 Memorandum of Understanding signed by the ACT Chief Minister and the Premier of New South Wales resulted in greater collaboration in the planning and delivery of essential services. Education and training was one of the priorities to progress under the memorandum. The Directorate joined with the Australian Bureau of Statistics and the Chief Minister and Treasury Directorate in supporting a cross-border utilisation project with the primary objective of collation of data and reporting of service provision across a number of ACT Directorates.

The Directorate worked in partnership with all other ACT Government Directorates in 2012-13 on the delivery of a broad range of services and programs to the ACT community. This included work with the Health Directorate to enhance the health and wellbeing of students in the public education system.

Response to significant organisational change and revision to administrative arrangements

Ms Joy Burch MLA was appointed the Minister for Education and Training in November 2012 following the ACT Government election. Ms Burch replaced Dr Chris Bourke MLA who was Minister from November 2011 until the appointment of Ms Burch in 2012.

Role in administration of legislation

Amendments and updates to the legislation are discussed in Section B4.