The Directorate continued to work in close partnership with the Australian Sustainable Schools Initiative (AuSSI) during the reporting year to promote and support the implementation of sustainable behaviours in ACT schools. AuSSI is a partnership between the Australian Government and states and territories to help schools achieve a sustainable future. In the ACT, AuSSI is managed by the Environment and Sustainable Development Directorate (ESDD) and is supported by the Directorate, ACT public schools and non-government schools.

The Directorate and AuSSI also continued to provide all public schools with assistance to integrate the National Solar Schools Program (NSSP) into student learning. Schools that received photovoltaic panel systems through the NSSP in 2012-13 were offered a teacher professional development workshop covering photovoltaic systems, smart metering and the sustainable management of energy in schools. Two energy workshops were held during the reporting year and a total of 67 public school staff, representing 50 schools, attended. AuSSI also delivered workshops for ACT schools on the Australian Curriculum Sustainability Priority, sustainable water management, establishing a Food Garden and writing a School Environmental Management Plan.

Information on a range of sustainability indicators for 2011-12 and 2012-13 for all public schools is summarised in Table C19.1 and was calculated with the assistance of ESDD.

Source: Finance and Corporate Support Branch and Schools Capital Works Branch
Notes:
a. Figures from February census of students. Preschool students taken as 0.5 FTE. Staff in schools counted based on FTE at final pay period (26) of the reporting year.
b. Percentage of Greenpower from whole of government electricity supply contract (0%).
c. Percentage of 2011-12 Greenpower adjusted to reflect actual percentage consumed by public schools (24.2%).
d. Headley Beare CTL (HBCTL) gas consumption removed from 2011-12 school-based results. Consumption is reported in office-based sustainability indicators in Table C19.2.
e. Figure is skewed as gas consumption data for Franklin and Bonner was not available at time of reporting
f. HBCTL water consumption removed of 2011-12 school-based results. Consumption is reported in office-based sustainability indicators in Table C19.2. Updated figures for Red Hill PS and Melba Copland Secondary School (high school campus) included in 2011-12 total.
g. The 2011-12 report used the GHG Protocol and NGA Factors methodology to calculate the CO2-e emissions. The Directorate has since been advised to use the methodology outlined in the ACT's Climate Change and Greenhouse Gas Reduction (Greenhouse Gas Emissions Measurement Method) Determination 2012 to more accurately represent the ACT. The figures for 2011-12 have been updated in this report to reflect this methodology.

Energy consumption and emissions are graphed in Figure C19.1 for four financial years from 2009-10 to 2012-13. For information on energy efficiency and GHG emission reduction strategies implemented in the reporting year refer to Section C20. 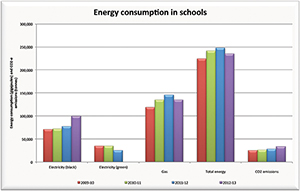 Water consumption across all public schools in 2012-13 totalled 339,206 kilolitres which was an increase of 19.65 percent. This increase is due to the easing of water restrictions and schools re-activating irrigation systems for play areas.The Directorate has completed the planning and construction of projects in the reporting year which aim to reduce the use of potable water for irrigation, including environmentally sustainable landscapes, connections to the urban waterway and artificial grass surfaces. Water consumption data for the four financial years from 2009-10 to 2012-13 is graphed in Figure C19.2. 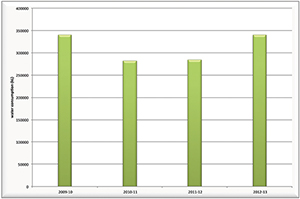 Environmentally sustainable landscapes, designed to improve water quality and minimise irrigation demands, are incorporated into all new school designs as well as landscape and high school frontage improvement capital works. The landscapes use drought tolerant plant species and are designed to maximise surface water retention through the use of passive technologies such as porous pavement and swales. Section C14 outlines the scope of works undertaken in the reporting year.

Scoping and design works to connect Lyneham Primary School, Lyneham High School and Dickson College irrigation systems to the Northside Urban Waterway system were undertaken in the reporting year. The connection of these three schools to the waterway will be completed in the 2013-14 reporting period.

The Directorate completed construction works to install artificial grass areas at five schools in the reporting period. These artificial playing surfaces lower water usage requirements for irrigation and provide safe, consistent surfaces for students to use all year round. The new spaces include play areas at Torrens and Theodore Primary Schools and new artificial sports fields at Telopea Park School (junior school) and Calwell and Weetangera Primary Schools.

The partnership with AuSSI to conduct water audits and provide water efficiency reports to all public schools was continued with seven public schools receiving a water audit in 2012-13, bringing the total to 82 schools. Each of these schools received a report recommending water saving initiatives based on the audit findings. To support the implementation of these water saving initiatives and to raise awareness of the range of relevant educational programs on offer to schools, a professional development workshop for teachers on water was offered this reporting year. Twenty-seven participants representing 15 public schools attended the workshop.

A review of schools waste contracts is planned for the 2013-14 reporting period. The objective is to achieve both a reduction in costs for schools as well as improved recycling by schools.

In conjunction with the Health Directorate, the Directorate installed water bottle refill stations at public schools to support the ACT Government's 'Investing in Healthy Canberra Kids' initiative. Refillable water bottles were supplied for each student.

Ride or Walk to School is an initiative managed by the Health Directorate which aims to encourage active travel in ACT schools. The Ride or Walk to School initiative provides an opportunity for school communities to work together to reduce their ecological footprint by being active on the way to school. Ten public schools signed up to the program in the reporting year and another nine public schools will join the program in 2013-14. The Directorate is collaborating with the Health Directorate to remove physical infrastructure barriers hindering active travel to school. An audit of the 10 schools' bike facilities was conducted in the reporting year and preliminary guidelines for the provision of bicycle storage facilities at schools has been drafted.

AuSSI ACT is also supporting the initiative through the delivery of a 'greenhouse gas emissions component' in three trial schools over a 12-month period in 2013-14. The three trial schools are Melrose High School, Harrison School and Palmerston District Primary School. These schools are evaluating the change in their GHG emissions through their participation in the Ride or Walk to School program. Preliminary scoping has been completed on the development of the evaluation methodology in the reporting year. Data will be collected and reported in 2013-14.

Gungahlin College was certified as a 5 Star Green Star - Education Design v1 by the Green Building Council of Australia during the reporting year bringing the total number of Green Star certified projects in public schools to four.

Applications for 5 Star Green Star - Education Design v1 certifications for Namadgi School and Neville Bonner Primary School continued to be progressed during the reporting period and outcomes are expected in the 2013-14 reporting year.

The information on a range of sustainability indicators for 2012-13 from two main central office sites (Braddon and Stirling) is given in Table C19.2. It does not include non-office (school) data (see Table C19.1).

Fyshwick and Higgins sites which were previously used for central office accommodation are no longer in use. Costs for the Lyons and Maribyrnong sites are met by the schools and are supported through School Based Management payments. Therefore, these four sites are not reported on for the purposes of Table C19.2.

The Directorate's central office at 220 Northbourne Avenue, Braddon, is a 2013 accredited recycler under the ACT SmartOffice recycling program. The Directorate is working with ESDD for ACT SmartOffice accreditation at the Hedley Beare Centre for Teaching and Learning (Fremantle Drive, Stirling). Commitment to the Program has increased the levels of recycling and increased the accuracy of measuring waste to landfill, paper recycling, co-mingled and organic waste.

The Directorate is working with the ESDD to develop a Resource Management Plan. The plan provides a basis for monitoring and evaluating resource efficiency measures against specific targets in relation to the management of water, electricity, gas and transport fuel consumption, waste production and recycling, and greenhouse gas emissions. The Plan will support the Directorate's compliance with the ACT Government's climate change strategy.

Source: Finance and Corporate Support Branch
Notes:
a. In August 2012 the ACT Government agreed to the Carbon Neutral ACT Government Framework and to reallocate ACT Government GreenPower purchase commitments for the period 2012-13 to 2018-19. A reduction in GreenPower purchase commitments from 37.5% to five per cent of the Government's electricity consumption will support the Carbon Neutral Fund http://www.environment.act.gov.au/cc/what-government-is-doing/act-government-operations/carbon_neutral_government_loan_fund and energy efficiency projects across ACT Government
b. Includes fuel vehicles used at the Instrumental Music Program in Kaleen and the Lyons Education Centre as well as the two main central office sites.
c. The reduction of water consumption in 2012-13 compared with 2011-12 is due to the Higgins and Fyshwick sites no longer being used for central office accommodation.
d. The results for the "estimate of co-mingled material" (based on bins collected) are significantly higher due to increased results in co-mingled recycling for 220 Northbourne Avenue (an ACT SmartOffice accredited recycler in 2013) and the Hedley Beare Centre for Teaching and Learning (ACT Smart Office accreditation pending).