The Directorate's strategic priorities for ecologically sustainable development, outlined in the Resource Management Plan, align with the ACT Government's commitments to waste minimisation, water efficiency, transport efficiency, energy efficiency and greenhouse gas reductions. The Directorate's priorities are informed by the strategic pathway outlined in AP2: A new climate change strategy and action plan for the Australian Capital Territory and the Carbon Neutral ACT Government Framework. The Directorate continues to pursue initiatives aimed at delivering the ACT Government's aspirational target for public schools to be carbon neutral by 2017.

a. Figures from February census of students. Preschool students taken as 0.5 FTE. Staff in schools figure is based on FTE at the February 2014 census. The FTE at this date is not indicative of average staffing during the year.
b. In June 2014, the Government established an Enterprise Sustainability Platform (ESP), to provide a consistent approach to reporting sustainability data in future years. The ESP provides continuously updated, accurate and auditable water, energy (electricity and gas), and GHG emissions data and utility billing cost information for its assets and agencies, a function which has not previously been available. The ESP was used to provide data for 2012-13 and 2013-14 in this Annual Report. This results in data that is different to that published in the 2012-13 report.
c. As part of its Carbon Neutral ACT Government Framework, the ACT Government committed to the purchase of five percent of ACT Government electricity consumption in GreenPowerTM. ACT Property Group obtained GreenPowerTM on behalf of all Directorates to meet this commitment for electricity consumed in 2012-13.
d. ACT Property Group purchased 7,530 megawatt hours of GreenPowerTM on behalf of the ACT government, representing five percent of the ACT Government's energy consumption for 2013-14.
e. As natural gas information was not available at the time of reporting, the natural gas reported in this table is for the period 1 June 2013 to 30 May 2014.
f. As water billing is provided quarterly, the water data in this table is for the period 1 May 2013 to 30 April 2014.

Electricity consumption across all public schools in 2013-14 totalled 25.9 million kilowatt hours (kWh), a decrease of 0.3 percent. Gas consumption totalled 117.2 million Megajoules, an increase of 8.0 percent from 2012-13.

Factors influencing the increase in gas consumption in 2013-14 included:

Water consumption across all public schools in 2013-14 totalled 351,641 kilolitres, which was an increase of 8.0 percent. Part of this increase was due to a full year of reporting for water consumption at Franklin Early Childhood School and Neville Bonner Primary School for 2013-14. In addition, Taylor Primary School's grounds were substantially irrigated post-construction to restore the grounds in preparation for the 2014 school year.

The Directorate continues to work in close partnership with ACTSmart Schools. ACTSmart Schools is the ACT Government's implementation of the Australian Sustainable Schools Initiative. The aim of the program is for all schools to reduce their environmental impact and embed sustainable management practices into everyday school operations.

Professional development and training was provided to school-based staff, including business managers, building services officers and teachers. Workshops on improving energy efficiency, waste and recycling practices were held. A network for teachers working in school environmental learning centres was also established during the reporting year, with quarterly meetings held.

The Ride or Walk to School program was an initiative managed by the Health Directorate which aimed to encourage active travel to ACT schools and reduce transport related GHG emissions. Seventeen public schools signed up to the program in the reporting year, bringing the total number of participating public schools to 19. To support the uptake of active travel to school, a learn to ride facility was constructed at Southern Cross Early Childhood School and a dirt bike track installed at Melrose High School. Another learn to ride facility will be completed at Franklin Early Childhood School in August 2014.

Roof mounted photovoltaic systems were installed at the final six schools in the reporting year, completing the program to install systems at all ACT public schools.

Installation of 70 kilowatt systems at Franklin Early Childhood School and Neville Bonner Primary School commenced during the reporting period and will be completed in 2014-15. Technical studies indicated that these systems will provide 58 and 79 percent, respectively, of each site's annual energy requirementa. Solar powered external lights were also installed at the Canberra College Performing Arts Centre and Wanniassa Hills Primary School.

a. Neville Bonner was not operating at full capacity during the reporting period, therefore this percentage may drop in the future.

Public schools received the maximum tariff rate (45.7 cents per kilowatt hour) under the ACT Feed-in-Tariff (FiT) scheme for small-scale systems. The collective size of solar panel installations at public schools approved under this scheme was 1,192 kilowatts. Fifty-one public schools generated FiT income for the entire reporting year and the remaining 35 schools were progressively connected to the national electricity grid between July and September 2013, generating FiT income for part of the reporting year. A total of 1,703.8 megawatt hours of solar energy was generated in 2013-14, resulting in approximately $780,000 of income for all 86 public schools. Schools' annual solar production results in 1,806 tonnes CO2-e of avoided emissions in the national electricity grid.

The Directorate continued to roll out the installation of smart meter technology at all public schools to capture electricity, gas and water consumption and solar energy generation. Installation and commissioning of the pulse meters for electricity, water and solar energy generation was completed at 35 schools in 2013-14, bringing the total number of completed schools to 86. Installation and commissioning of the gas smart meters was completed at 25 schools in the reporting year, with the remaining 61 schools to be completed in 2014-15.

These meters provided schools with real time data on consumption and energy generation which supported both the management of resources by schools and, through a web-based interface, the development of curriculum for students. The web-based interface is publicly accessible at www.watergroup.com.au/actschools.

Stage 1 of the Carbon Neutral Schools project continued to be rolled out by the Directorate in
2013-14. Designs for LED light upgrades at Canberra High School and Theodore Primary School were completed during the reporting period, with installation to be completed in 2014-15. Energy efficient fluorescent lamp upgrades were completed at seven schools in 2013-14 (North Ainslie, Evatt, Fadden and Weetangera Primary schools, Alfred Deakin and Mount Stromlo High schools and Caroline Chisholm School (senior campus)). These lamps are expected to reduce energy use for lighting by 25 percent. Post-implementation monitoring of energy use will be undertaken in 2014-15.

Detailed architectural investigations completed in 2013-14 identified four schools for potential ceiling insulation upgrades. Works will be trialled at North Ainslie Primary School in 2014-15, with lessons learnt to be applied to the other sites.

In 2013-14, the Directorate was successful in its application to the Carbon Neutral Government Loan Fund for $895,000 (GST exclusive) to replace existing T8 fluorescent lamps with LED lamps at 12 public schools. This brought the total loan funding received for LED lamp upgrades to $2,423,168 across 22 public schools. During the reporting year, works were completed at  Lake Tuggeranong College and the procurement of lamps completed for eight other schools. The full program of works will be completed in 2014-15.

An application for $93,390 (GST exclusive) for the provision of new solar hot water systems for the hydrotherapy pools at Black Mountain and Cranleigh Schools was also successful. Preliminary scoping work for the systems was completed in the reporting period. Design, documentation and installation of both systems will be completed in 2014-15. Installation and commissioning of a solar hot water system at Erindale College and Leisure Centre funded in 2012-13 was completed in the reporting year.

These landscapes, designed to improve water quality and minimise irrigation demands, are incorporated into all new school designs as well as landscape and high school frontage improvement works, as reported in Section F4.

Connections to the Inner North Stormwater Reticulation Network, including storage tanks and water meters, were completed at Lyneham Primary School, Lyneham High School and Dickson College in 2013-14. Irrigation systems connecting to this recycled water system were also installed at Lyneham Primary School and Lyneham High School ovals. The systems will be brought online in 2014-15.

The application for 5 Star Green Star – Education Design v1 certification for Namadgi School was progressed during the reporting period, with a final outcome expected in 2014-15.

Canberra High School was registered for the Green Star Performance Tool (pilot) in the reporting year. This tool focuses on identifying and implementing best practices in the daily operation and maintenance of a facility to reduce the environmental impact of the asset. Two workshop sessions were conducted in the reporting year as part of the assessment process. The application will be completed in 2014-15.

As capital works were undertaken at public schools, including new facilities, building upgrades and refurbishments, opportunities were taken to improve the energy efficiency and water conservation of these spaces. This included solar passive design, natural ventilation and thermal comfort, lighting upgrades, solar tubes and roof insulation. Details of capital works completed in 2013-14 are found in Section F3.

Information on operational consumption of resources for the two main central office sites (Braddon and Stirling) is provided in Table B4.2. Costs for the smaller Lyons and Maribyrnong sites were met by schools, therefore data for these sites are not reported in Table B4.2.

Electricity consumption at the two sites decreased by 5.2 percent while gas consumption increased by 75.0 percent during the reporting year. This resulted in a 1.7 percent increase in GHG emissions. The increase in GHG emissions was due to the unavailability of readings for four months of 2012-13 as a result of a fault in a natural gas meter. A new meter was installed in January 2013.

Installation of a 176kW solar panel system at the Hedley Beare Centre for Teaching and Learning in Stirling commenced in 2013-14 and is expected to be completed in 2014-15. Technical feasibility studies indicate that this system will provide 27 percent of the site's annual energy requirement.

Water consumption totalled 2,034 kilolitres, which was a decrease of 16.8 percent. This decrease was due to higher usage at the Stirling site in the 2012-13 reporting year, primarily due to a water leak from the hot water system.

The Directorate's Braddon and Stirling sites are accredited recyclers under the ACT SmartOffice recycling program. Commitment to the program increased the levels of recycling and increased the accuracy of measuring waste to landfill, paper recycling, co-mingled and organic waste.

The Directorate's updated Resource Management Plan was approved during the reporting period.

Notes:
a. Increase due to refurbished office accommodation to provide Stage 6 at the Hedley Beare Centre in February 2014.
b. In June 2014, the Government established an Enterprise Sustainability Platform (ESP), to provide a consistent approach to reporting sustainability data in future years. The ESP provides continuously updated, accurate and auditable water, energy (electricity and gas), and greenhouse gas (GHG) emissions data and utility billing cost information for its assets and agencies, a function which has not previously been available. The ESP was used to provide data for 2012-13 and 2013-14 in this Annual Report. This results in data that is different to that published in the 2012-13 report.
c. ACT Property Group purchased 7,530 Megawatt hours of GreenPowerTM on behalf of the ACT Government, representing five percent of the ACT Government's energy consumption for 2013-14.
d. Natural gas consumption increased at the Stirling site due to unavailability of reading for four months of 2012-13. The natural gas meter was faulty and a mew replacement meter was installed.
e. As water billing is provided quarterly, the water data in this table is for the period 1 May 2013 to 30 April 2014.
f. Waste to landfill decrease is due to improved sustainability practices following ACTSmart Office accreditation at the Stirling site.

Mawson Primary School has two student groups that drive sustainability, not just in their school but also at home. The 'Greenies Group' comprises student representatives from each class (excluding preschool classes). In addition, the 'ECO leaders' are actively involved in the school's ECO Centre, a combined classroom and outdoor area dedicated to sustainable living initiatives.

The combined activities of these groups has resulted in regular appearances at school assemblies; gardening, weeding, planting, watering and caring for animals in the ECO Centre's gardens; posters created; activities organised for national environmental events; fundraising and waste management. 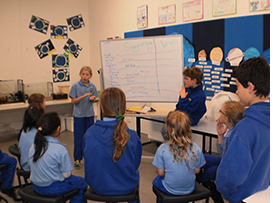 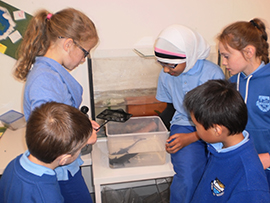