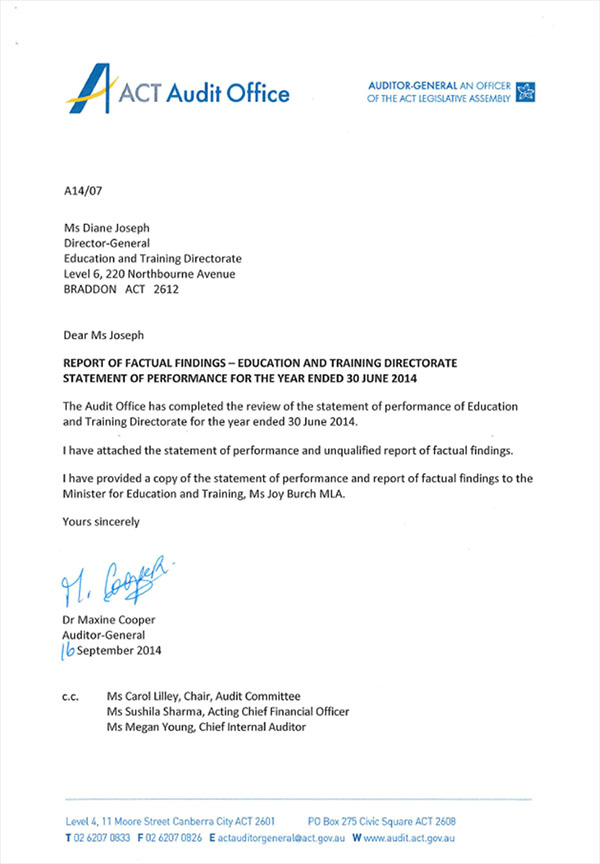 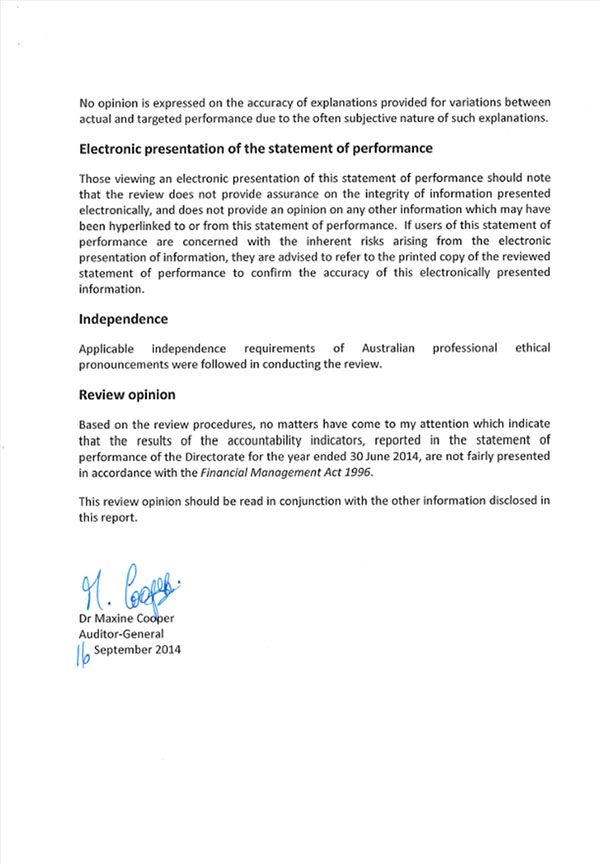 In my opinion, the Statement of Performance is in agreement with the Directorate's records, fairly reflects the service performance of the Directorate in providing each class of outputs during the financial year ended 30 June 2014.

Public primary school education spans the years from preschool to year 6. It is available, on average, for eight years with a preschool age of four years and a kindergarten starting age of five years. A balanced curriculum allows the students to develop the qualities needed for lifelong learning. Public high school education covers the years 7 to 10. ACT public high schools offer a broad and comprehensive education across all key learning areas. Public secondary college education covers years 11 and 12, offering courses catering for a broad range of student needs and interests.

A range of educational settings are available in ACT public schools for students with a disability. These include special needs schools, special classes or units in mainstream schools, additional support in mainstream classes and early intervention programs to children between the ages of two to five years who have a disability or a developmental delay.

Average Cost ($) Per Student Per Annum in Public:

a. For this indicator, primary school students are defined as kindergarten to year 6 to enable cross-jurisdiction comparisons.

b. The survey was conducted during June 2014. A total of 111 approved education and care services completed the survey. Responses were collected on a five point scale of strongly agree, agree, neither agree nor disagree, disagree or strongly disagree. Strongly agree and agree responses were counted as satisfied. Non-responses were excluded.

c. The apparent retention rate is an indicative measure of the number of students who have stayed in school, as at a designated year level. It is the percentage of the respective cohort group that those students would be expected to have come from assuming an expected progression of one grade per year.

d. The apparent retention rate for the ACT may be higher than 100% as a result of cross border students attending ACT schools.

The Directorate contributes to the maintenance of standards in non-government schools and home education through compliance and registration, and the accreditation and certification of senior secondary courses through the Board of Senior Secondary Studies. The Directorate also undertakes the administration and payment of the Commonwealth and ACT Government grants.

Output 3.1: Planning and Coordination of Vocational Education and Training Services

The Directorate is responsible and accountable for the provision of strategic advice and management of vocational education and training (VET) and higher education in the ACT. This includes administering, monitoring and auditing territory and national funds for a variety of programs addressing skills development. The VET system in the ACT responds to the demands and requirements of industry and the community. The Directorate gathers advice from industry stakeholders to predict industry trends and identify the future training requirements of the ACT.

i Participation in vocational education and training:

a. Previous indicators a. to e. were discontinued and advised in the 2013-14 Budget.