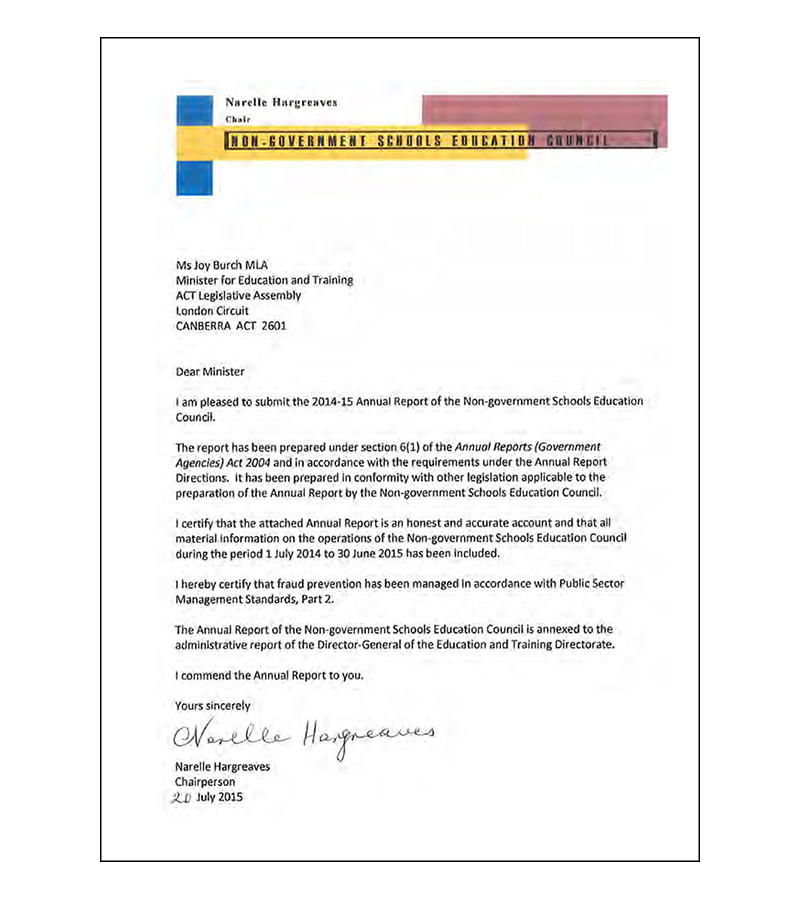 B. Organisation Overview and Performance

The Non-government Schools Education Council (the Council) was established under section 106 of the Education Act 2004 (the Act).

The Council's functions are to advise the Minister on any aspect of non-government schooling and to meet with the Government Schools Education Council to discuss matters of mutual interest. Advice provided to the Minister may be initiated by the Council or may be in response to a request from the Minister. Under section 127 of the Act the Minister must present a copy of the advice to the Legislative Assembly.

The Council identified the following goals to be achieved in the 2014-15 year:

The key issues considered by NGSEC in 2014-15 were as follows:

At the end of June 2015, the Non-government Schools Education Council ceased to operate. During the many years of the Council's operations valuable contributions and advice has been provided to the Minister(s) about the diversity of education provisions in the ACT.

Section 109 of the Education Act 2004 requires the Minister to appoint the following Council members:

The Education Act 2004 outlines the conditions under which the Minister may appoint or terminate the appointment of a Council member. As a statutory appointment the Standing Committee on Education, Training and Youth Affairs is consulted on proposed appointments.

During the reporting period, the Council met seven times between 1 July 2014 and 30 June 2015 including a joint meeting with the Government Schools Education Council.

The Council has no funds for which it is responsible; therefore Council does not prepare financial statements.

The Directorate provides secretariat and advisory assistance to the Council. The Council may call on directorate staff to address Council meetings or meet with members to discuss particular issues or programs relevant to the work of the Council. If required, the Council would have access to legal advice through the ACT Government Solicitor's Office.

All new members are provided with the ACT Government Boards and Committees Code of Conduct and asked to sign a Code of Conduct/Conflict of Interest Declaration Form. These documents outline expectations regarding ethical behaviour in order to satisfy standards of probity and accountability that apply to the public sector. These documents also provide information to assist members in identifying, avoiding and disclosing potential conflicts of interest.

The Risk Management Plan was monitored by the Council in 2014-15 and reviewed in April 2015.