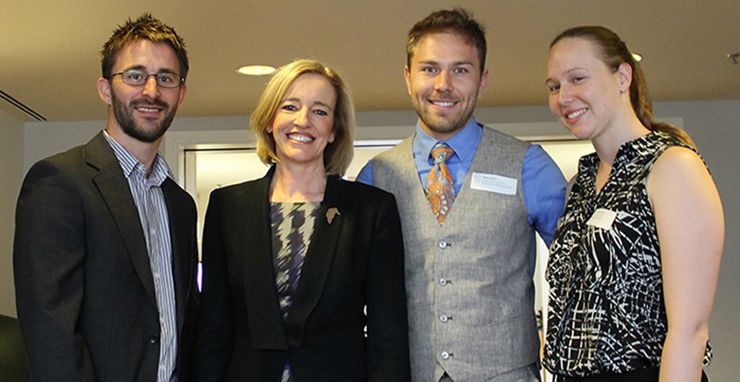 The Education and Training Directorate strives for better outcomes for all learners and for the ACT community more broadly.

The ACT Public Service values and behaviours of Respect, Integrity, Collaboration and Innovation underpin our service delivery to the community. Specifically:

Our role and stakeholders

Directorate services include the provision of public school education, regulation of education and care services, registration of non-government schools and home education, and the planning and coordination of vocational education and training. Our clients and stakeholders include:

The ACT public education system is based on four networks. A School Network Leader is assigned to each network and has line management responsibilities for each principal in the network and each school's improvement agenda: 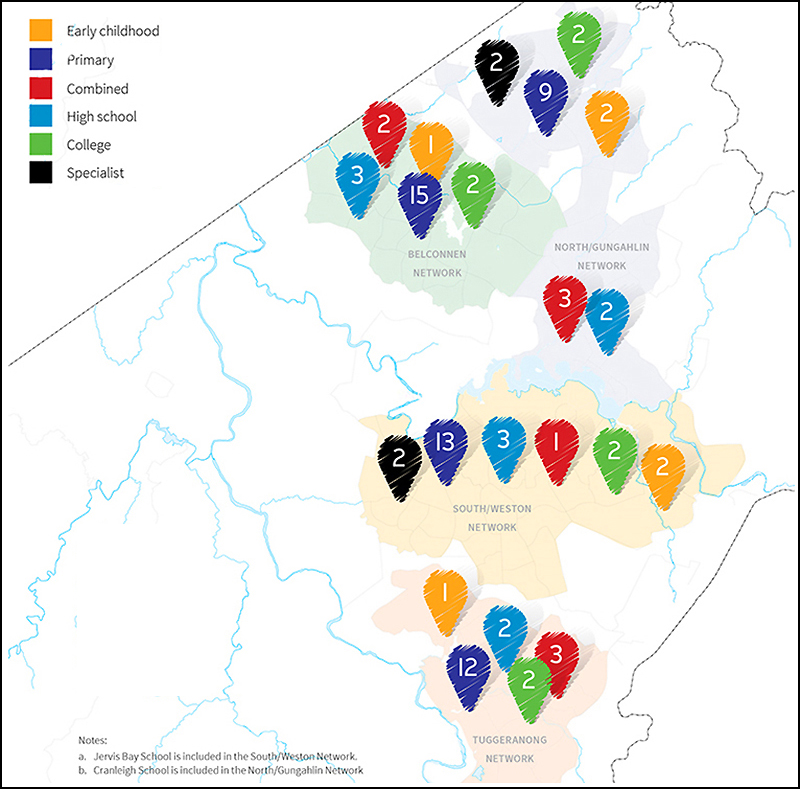 Ms Leanne Cover was in the position of Deputy Director-General from July 2014 to February 2015, after which she took up the position of Interim Chief Executive Officer of the Canberra Institute of Technology.

The divisions supporting the Director-General under the responsibility of the Senior Executive Team are:

The organisational structure of the Directorate as at 30 June 2015 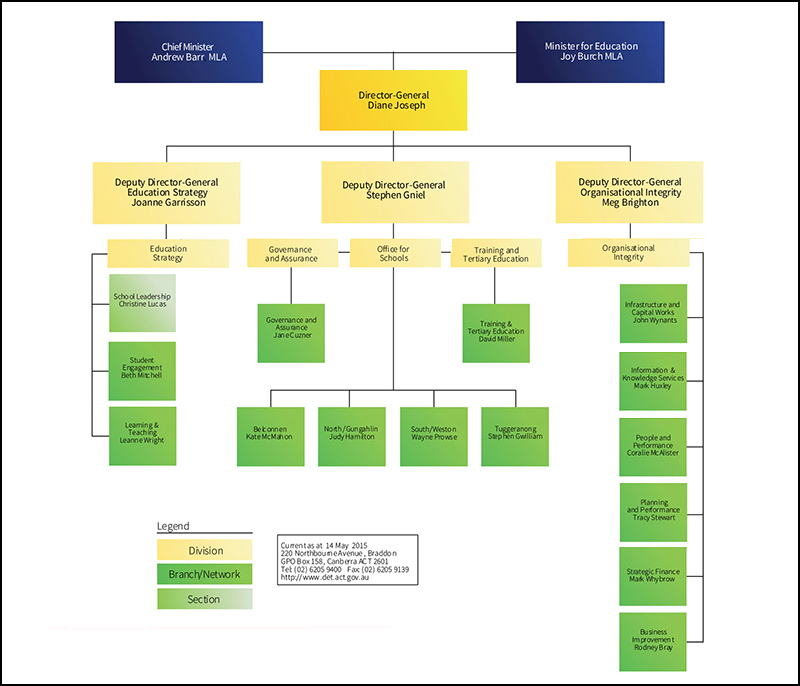 The Director-General is responsible for the efficient administration of the Directorate and establishing its corporate and strategic directions.

The Deputy Director-General oversees coordination activities across the Directorate, manages a range of national and whole of government initiatives and responds to issues at ministerial, intergovernmental and key stakeholder levels.

The Deputy Director-General, Organisational Integrity has responsibility for the planning and coordination of human, financial, information technology and physical resources of the Directorate. The Deputy Director-General manages the modernisation of the information and communication technology infrastructure and planning and construction of new schools through the annual capital works program of the Directorate.

The Deputy Director-General is also responsible for the coordination of the national assessment programs, performance reporting and the assessment of educational programs through the management of a range of data collections. The Deputy Director-General leads Strategic Finance, Infrastructure and Capital Works, People and Performance, Planning and Performance and the Information and Knowledge Services branches of the Directorate.

The Deputy Director-General, Education Strategy has responsibility for the development and implementation of educational strategy and delivery of educational support services in public schools.

The Deputy Director-General leads the development and implementation of the school improvement framework through student-centred learning and teaching initiatives. Support services are provided in the areas of student welfare and transitions, and Aboriginal and Torres Strait Islander, early childhood and special education programs.

Section 10 of the Remuneration Tribunal Act 1995 requires its administrative body (the Tribunal) to inquire into and determine the remuneration, allowances and other entitlements of the Director-General and executives within the meaning of the Public Sector Management Act 1994.

The Tribunal, through a determination in April 2015, increased the remuneration for the Director-General and executives by 2.5 percent, with effect from 1 July 2015.

The Directorate committee structure is designed to improve the effectiveness of decision making, and to ensure that decisions align with delegations and accountability, and deliver on the commitments of the Strategic Plan.

The Senior Executive Team is the peak decision making body of the Directorate and is responsible for significant operational, policy and resourcing decisions and approvals. The Senior Executive Team sets and reviews the strategic direction of the Directorate and monitors performance in key areas, including educational and financial performance. The Team is also responsible for ensuring compliance with laws, regulations, accounting standards and Directorate policies.

The Audit Committee monitors and reviews Directorate adherence to relevant legislative requirements and its approach to business ethics and corporate conduct. The committee is responsible for overseeing the risk management and audit functions. The committee also reviews the annual financial statements and provides advice to the Director-General on significant risks, audit outcomes and implementation of mitigation strategies.

The Security and Emergency Management Committee provides advice to the Director-General on significant security proposals, directions, policies and training.

The Directorate Consultative Committee was established in accordance with the relevant enterprise agreements. The main objectives of the Consultative Committee are to improve consultation and communication processes between staff, senior managers and unions regarding significant changes to policy and guidelines that relate to the agreements; promote the sharing of information across the Directorate, and provide a forum for consultation.

The Respect, Equity and Diversity (RED) Consultative Committee provides a forum for sharing current and emerging issues and has the responsibility for overseeing all respect, equity and diversity functions of the Directorate and its employees. The RED Consultative Committee provides advice and contributes to the development and implementation of Directorate plans. The committee also provides advice on the implementation of whole of government plans.

The Principals' Advisory Group, formerly the School Network Reference Group, is a communication and consultation group. The Principals' Advisory Group considers key strategic policy and operational matters and provides advice to the Corporate Executive and Senior Executive Team. The group raises policy and operational issues impacting on effectiveness and improvement from a school perspective.

The Data Integration Action Group provides advice informing the development of systems, processes and practices to enable schools to access and use data. In particular, the Action Group provides advice and information concerning the development of the school data tool that will provide timely and accurate information to enable principals to better target resource usage and respond to student need.

The Leadership Development Group assists the Director-General to create a networked learning organisation by developing the workforce capability of all staff. The focus of this group is to set strategic directions, improve strategic planning, ensure alignment and provide governance for the Directorate's professional learning and training activities.

The Human Resources Action Group provides an important link between schools and the Directorate's Senior Executive in the design of empowered business practices. The Action Group draws on the work already completed through the ACT Public Schools empowerment change logic map. An important component of the change logic map is preparing a platform throughout 2014/15 for enterprise bargaining discussions. This platform was informed by advice provided by principals about enabling practices within schools.

The Student Resource Allocation (SRA) Advisory Group was formed in Term 2, 2015. The main objective of the SRA Advisory Group is to ensure that school's perspectives are reflected in strategic direction, project planning, policy development and shaping the design and delivery of support services associated with implementing the SRA. 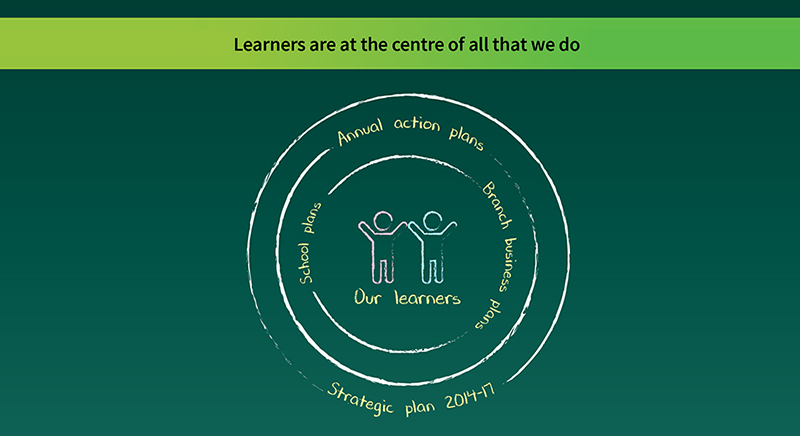 The Directorate designed internal controls to monitor and manage risk in delivering the Strategic Plan. The Internal Audit program and the Risk Management Framework are the primary risk management tools to manage, monitor and report on the Directorate's risk management and audit functions. A biannual School Compliance Report is the mechanism applied to monitor mandatory compliance in ACT public schools and provides a level of assurance that the Directorate is meeting its legislative obligations.

More information on the Directorate's governance arrangements, including risk management and the audit program, is provided in Sections B.3 to B.6.

Under the Australian Capital Territory (Self-Government) Act 1988 (Cth) and the Public Sector Management Act 1994 (ACT), the Chief Minister allocates responsibility to the various Ministers, Directors-General and agencies for the administration of ACT legislation. The Minister for Education and Training and the Director-General of the ACT Education and Training Directorate are administratively responsible for the list of legislation.

Priorities - The Strategic Plan contains priorities to be achieved over a four-year period. To view Priority information in detail click on the relevant section below...

The Recognition of Service Awards were held during ACT Public Education Week (25-29 May 2015) to honour the long term commitment, dedication and loyalty of employees who have had long periods of uninterrupted service with the ACT Education and Training Directorate.

Employees with ten to thirty years of service are recognised at an individual school or branch level celebration and are presented with a Recognition of Service Certificate.

Employees with forty to fifty years of service were invited to attend a formal Recognition of Service Award Ceremony on 27 May 2015 at the Canberra Museum and Gallery, and to receive their certificates from the Minister for Education and Training, Ms Joy Burch MLA. Mr Robert Pastor has been the principal at Jervis Bay School since 2008. Robert has successfully fulfilled the leadership challenge of a school in a stunning natural environment with high levels of unemployment and socioeconomic disadvantage as well as a complex system of governance.

Under Robert's leadership, the Jervis Bay School has strengthened its role as the heart of the local community, and as reflecting the strong Indigenous culture and proud history of Wreck Bay.

Through Robert's powerful role in fostering social cohesion, Robert has developed a student-centred education model that partners with the greater community to build cultural identity and pride, bring local Indigenous language into the school and strengthen student engagement.

The award recipients were:

Melrose High School teacher, Geoff McNamara, was inspired to improve on his own student experience and seek out working scientists many years later to engage students in his science classroom. Known as 'Mr Mac', he coordinates regular visits from practising scientists, science field trips and has created a hothouse of science learning - complete with a seismometer, GPS antenna, and weather station, each transmitting real-time data straight into the classroom. It is an environment where every student can experience the impact of science in daily life. 'We all need science literacy to navigate the complexity of the modern world', he says.

For his contributions to science teaching and inspiring students in science, Geoff McNamara was awarded the 2014 Prime Minister's Prize for Excellence in Science Teaching in Secondary Schools. 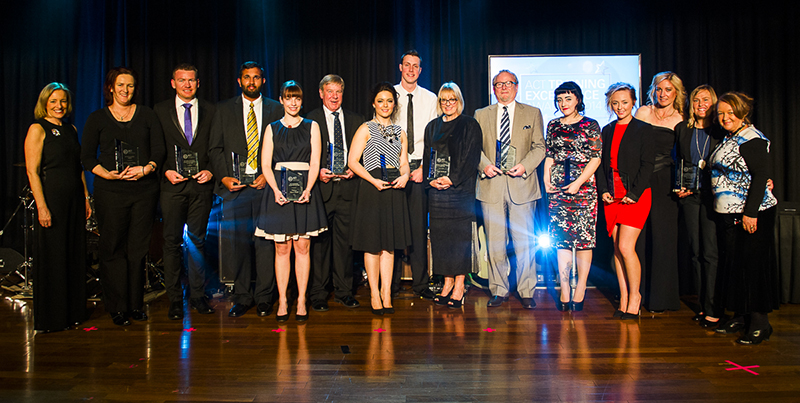 National awardees from the ACT were:

On 12 March 2015, the Directorate celebrated International Women's Day with a breakfast attended by 125 Directorate staff and students at The Deck at Regatta Point. Captain Sally Dorsett provided a keynote address reflecting on her role in the Royal Air Force and Royal Australian Air Force. Through her role in the Royal Australian Air Force Sally has been pursuing change for work flexibility for women and men in the Australian Defence Force.

The Minister for Education and Training, Ms Joy Burch MLA, presented the Women of Achievement Awards to outstanding role models, inspiring others to achieve.