Board of Senior Secondary Studies

▾ In this section ▾

I am pleased to submit the Annual Report of the ACT Board of Senior Secondary Studies for the year ending 30 June 2016.

It has been prepared in conformity with other legislation applicable to the preparation of the Annual Report by the ACT Board of Senior Secondary Studies.

I certify that the attached Annual Report is an honest and accurate account and that all material information on the operations of the ACT Board of Senior Secondary Studies during the period 1 July 2015 to 30 June 2016 has been included and that it complies with the Chief Minister's Annual Report Directions.

I hereby certify that fraud prevention has been managed in accordance with Public Sector Management Standards, Part 2.

The Annual Report of the ACT Board of Senior Secondary Studies is annexed to the administrative report of the Director-General of the Education and Training Directorate.

I commend the Annual Report to you.

The key functions of the Board are to:

The Board is committed to:

The Board’s goal is to provide a high quality curriculum, assessment and certification system that supports:

In 2013 the Board developed a new strategic plan to guide its activities for the period 2014-2016. The key focus areas for the Board are:

Full implementation of the ESL and Geography courses integrating the Australian Curriculum will occur in 2017.

The Board commenced a Review of Senior Secondary Curriculum in 2015 and appointed a committee to investigate a range of key issues including a vision statement, design specifications for courses, organisation of course frameworks and the purpose and scope of registered units. The committee delivered its recommendations to the Board in October 2015. The recommendations included:

In August 2014, the Review of Certification committee recommended to the Board that the Assessment and Certification Committee (ACC) explore online, adaptive literacy and numeracy testing developed with a view to:

The Board approved the recommendation and the investigation is ongoing. Negotiations were held throughout 2015 with the Western Australian School Curriculum and Standards Authority (SCSA) resulting in two ACT trials of the SCSA’s Online Literacy and Numeracy Assessment (OLNA) tool. In November 2015, year 10 students from four schools across the three sectors participated in the OLNA Reading, Numeracy and Writing tasks. The trial provided valuable information to the schools and to the students on literacy and numeracy standards including detailed diagnostics on those students who fell below the Australian Core Skills Framework (ACSF) level 3 in literacy and/or numeracy. The trial also provided an indication of the technological capabilities of the individual schools in relation to online testing.

In 2016, a more extensive trial was conducted with year 10 and year 11 students across eleven schools sitting the Reading and Numeracy components of the OLNA. This extended trial provided insights into the issues associated with rolling out the test on a larger scale and once again gave the schools valuable data on students’ literacy and numeracy levels.

In 2016, the Office of the Board of Senior Secondary Studies (OBSSS) organised a celebration of the 40th Anniversary of the ACT Senior Secondary System. In 1976, the ACT commenced delivery of its own senior secondary certificate. The report Secondary Schools for Canberra provided the blue print for the new system with its recommendation to replace external exams by continuous assessment where results were moderated using a system wide scaling test. Another key recommendation was the introduction of senior secondary colleges in the public sector. The OBSSS took the lead in celebrating this milestone with current and past members of the ACT education community.

The reunion was held at the Canberra College Performing Arts centre in April and attended by well over 100 significant contributors to the system, past and present, including the Minister for Education. The centrepiece of the evening was presentations from three of the pioneers who recounted tales of the early days framed by a backdrop slide presentation of photographs contributed by schools.

Three of the four public college foundation principals were able to attend. This event enabled current educators to connect with individuals who played a role in the formation of the ACT Senior Secondary system. Moreover, the event created a platform for imagining the future.

Key focus areas over the next year will include the ongoing implementation of courses embedding the Australian Curriculum, the implementation of recommendations coming from the Review of Curriculum, the continuing investigation of online literacy and numeracy testing, and the upgrading of the moderation database within the BSSS certification database. 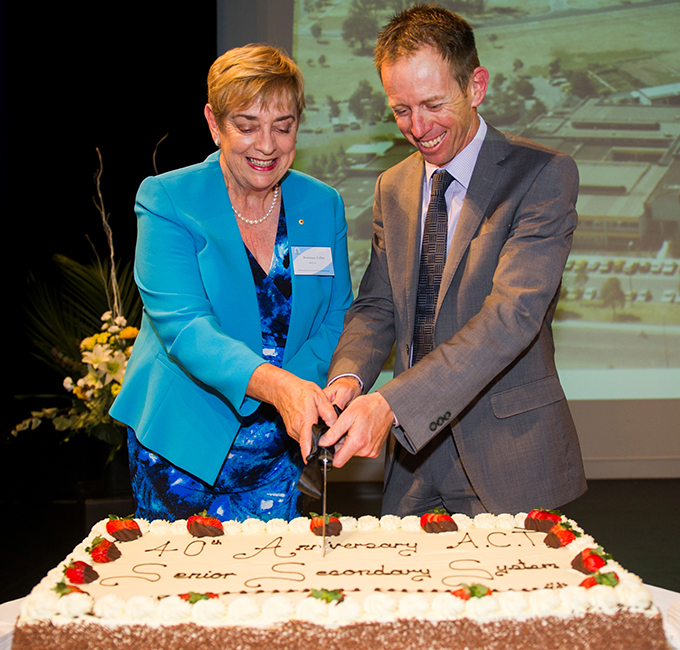 The BSSS Act (s8) creates a board with a broad membership of 15 from the many stakeholders in senior secondary education. Members, other than the Director-General of the Education Directorate, are appointed by the Minister for Education for a period of up to three years. Members can be reappointed if they are eligible. One new member was appointed to the Board and three members were reappointed in February 2016.

Nominees from the following four organisations have been submitted to the Minister for appointment:

Remuneration for Board members

The Chair is the only member eligible to receive remuneration, at a rate determined by the ACT Remuneration Tribunal.

Prior to appointment, Board members are provided with the Bowen Code of Conduct as a guide to ethical behaviour. Members sign a declaration that they have read and agree to observe the principles of the code, and agree to disclose all conflicts of interest that arise during their term on the Board. The Board meeting agenda has declaration of conflicts of interests as a standing item. ACT public servants on the Board are also bound by the ACT Public Sector Management Act 1994.

The Board has six scheduled meetings each calendar year. The Board met on three occasions from July-December 2015.

The above Board has met on three occasions from January to June 2016.

The Board appoints committees and panels to provide advice on specific matters. The main standing committees and their roles are listed below. Membership of these committees in 2015 and 2016 is included in Appendix B.

TABLE BSSS 3: BOARD STANDING COMMITTEES AND THEIR ROLES

The Board secretariat is managed by the Director of the Board and consists of 10 other staff; six teachers and four administrative officers, all employed through the Directorate. The Director reports to the Board on its legislated functions and to the Directorate on ministerial, financial, audit, human resource and other corporate functions.

An informed and effective response to international, national and local initiatives

The Board has continued to provide and facilitate ACT feedback on national curriculum and reporting initiatives through formal responses, teacher participation in curriculum development and surveys, consultation and membership of national working parties. The Board has made contributions to the Consultation on the Transparency of Higher Education Admissions Processes, the Review of VET in Public Colleges, the Review of the Interstate Transfer Index (ITI), the Review of the NSW/ACT meshing processes for the Australian Tertiary Admission Rank (ATAR), the National Education Evidence Base Issues Paper, the national International Baccalaureate/ATAR conversion process and the Commonwealth Government’s Work Readiness Research Project.

In 2015, the Office of the Board (OBSSS) assumed responsibility for the leadership for the Australasian Curriculum and Certification Authorities (ACACA) when the Director was appointed as the Chair of ACACA and the Technical Advisor assumed responsibility for secretariat services to ACACA. ACACA is a high level forum composed of the Chief Executives of Australian and New Zealand Boards of Studies, the Chief Executive of ACARA and a representative from the Commonwealth Department of Education.

A high quality, high equity curriculum, assessment and certification system that caters for all students

In 2015-16, course frameworks in Commerce, Behavioural Science, Politics & Law and Integrated Learning have been endorsed by the Board. Nineteen courses were approved for delivery to year 11-12 students from 2016 and 22 teams are currently developing courses for implementation from 2017. These courses are reviewed by expert panels of teachers, representatives from tertiary institutions, industry and the community. A list of the panels that met to consider courses in 2015-16 is included in
Appendix B.

The Board has continued its focus on the enhancement of assessment in colleges. Feedback on the quality and effectiveness of school-based assessment and consistency in the application of grade achievement standards has continued to be provided to colleges through system wide moderation. Over 1,000 senior secondary teachers from the ACT and overseas participated in each of the Moderation days in August 2015 and March 2016.

In 2015, 4,701 students met the requirements for an ACT Senior Secondary Certificate. This included 4,407 students enrolled in ACT colleges, including CIT Pathways College, and 178 students enrolled in overseas colleges. In the ACT, this represented 90.5 percent of year 12 students compared with 91.5 percent in 2014. There was a decrease in the percentage of females achieving a Senior Secondary Certificate from 2014 to 2015 and an increase in the percentage of males.

Of the Senior Secondary Certificate receivers 2,933 students also achieved a Tertiary Entrance Statement (TES), having met the requirements for university entrance and calculation of an Australian Tertiary Admission Rank (ATAR). This included 2,781 students enrolled in ACT colleges and 152 students enrolled in overseas colleges.

One hundred and twenty one students (61 females, 60 males) from 17 colleges completed an H course through the ANU Secondary College Program in 2015. Of these students, 10 completed a course in Mathematics, 9 in Physics, 7 in Astrophysics, 29 in Chemistry, 19 in Conservation Biology, 28 in Japanese, 1 in Chinese, 4 in Indonesian, 3 in Music and 11 in Engineering. Seventy six students (63 percent) used their scaled H course score in their ATAR calculation. Source: ACT Board of Senior Secondary Studies
Note: From 2006 students classified as Mature Age are included in the data.

FIGURE BSSS 2: ILLUSTRATES THE RANGE OF ATARS ACROSS COLLEGES FOR 2015. The following table gives the percentage of Senior Secondary Certificate and TES receivers who completed an accredited course in the nominated areas.

Whilst the minimum number of courses from different course areas required for an ACT Tertiary Entrance Statement is two T and/or H courses, 63.9 percent of ACT students used scaled course scores from four different course areas in the calculation of their ATAR. This is an increase of 0.1 percent from the 2014 cohort.

The Board issues vocational certificates to years 10 and 12 students who have completed vocational qualifications through colleges as Registered Training Organisations (RTOs). In 2015, this included 556 year 10 students and 1,105 year 12 students. Of these students, 32 completed an Australian School-based Apprenticeship with their college as the RTO. 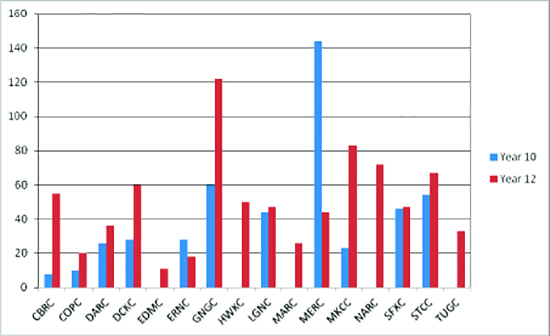 In addition to vocational studies undertaken during years 11 and 12 in colleges, vocational programs undertaken with external RTOs can contribute to the requirements for year 12 certification and be included on the ACT Senior Secondary Certificate. In 2015, vocational qualifications achieved through an external RTO and registered by the Board were recognised on the Senior Secondary Certificate as an E course. In 2015, eight students were awarded an E course. The E courses were in the areas of Business, Hair & Beauty and Hospitality.

Students may receive recognition for more than one vocational qualification completed with external RTOs.