The Directorate delivers quality ACT public school education and early childhood education to shape every child’s future and to lay the foundation for lifelong development and learning. The Directorate works in partnership with students, parents and the community to ensure that every child and young person in the ACT will benefit from high quality, accessible education.

In addition to providing public school education and early childhood education, the Directorate is responsible for the regulation of education and care services, registration of non-government schools and home education. Through this role the Directorate also facilitates the provision of quality education services across the ACT.

A broad range of services and activities are delivered by the Directorate under five domains:

Key risks, including mitigation strategies, are identified below:

The Directorate provides alignment through key strategic documents including the Directorate’s Strategic Plan 2018-21: A Leading Learning Organisation. The Strategic Plan is communicated to schools and the community, and schools are supported in ensuring alignment through system wide planning processes. The Directorate has established a comprehensive communication strategy to engage students, families and the community around the Future of Education in the ACT.

4. Inadequate prevention, preparedness and response to environmental threats, including:

The Directorate has undertaken a number of actions to continue to improve safety in the workplace, including hosting occupational violence risk workshops, raising awareness of workplace health and safety obligations of staff and delivery of refresher training for school principals and staff. In 2017 the Directorate developed an ACT Education Directorate Managing Occupational Violence Policy and Plan. The Directorate annually reviews emergency management frameworks and plans. Evacuation and lock down exercises are undertaken on a regular basis. Through the Protective Security Policy Framework the Directorate has programs, policies and procedures in place to continue to improve the safety of students, staff, families, visitors and contractors.

The Directorate conducts strategic asset management planning; provides timely advice to government about risks and associated remediation options and has focused investment on core issues – such as heating and cooling systems and electrical works.

Over the period, the Directorate has increased the visibility of data for decision making and has developed a tiered approach to evidence access and analysis. The Directorate has provided masterclasses for school leaders as they develop their strategic plans (focusing on the schools that have just completed school review) and developed a professional learning program to provide guidance and support for schools. The Directorate has established performance indicators with a clear line of sight between government priorities and achievements in each school based on student performance data over time. The Directorate is continuing to build agency-wide evaluation expertise and skills.

There were no significant accounting changes that impacted the 2017-18 financial statements.

The Directorate has managed its operations within the 2017-18 budgeted appropriation. During the financial year, the Directorate achieved savings targets and internally managed cost pressures associated with increased enrolments including increases in numbers of students with a disability.

The table below provides a summary of the financial operations based on the audited financial statements for 2016-17 and 2017-18.

In comparison to 2016-17, the net cost of services in 2017-18 increased by $50.6 million. The net increase is primarily due to additional employee expenses associated with staff wage and salary increases, an increase in learning professionals and administrative staff numbers to meet enrolment growth, along with increased depreciation expense due to the flow on effect of the revaluation of the Directorate’s land and building assets late in 2016-17, and increased repairs and maintenance expenditure.

In 2017-18, the operating deficit for the Directorate was $75.1 million and was $5.6 million or 8 percent greater than the original budget deficit of $69.5 million. The variance was primarily due to increased expenditure related to Directorate cash funded initiatives, in addition to increased expenditure related to enrolment growth in ACT Public schools and repairs and maintenance.

The 2017-18 total comprehensive deficit totalled $83.1 million which comprises the 2017-18 operating deficit of $75.1 million and a decrease in the Asset Revaluation surplus due to the impairment of Campbell Primary School and Narrabundah College, due to the demolition of buildings at each school.

The increased revenue from 2016-17 is primarily due to additional funding received for increased salaries and wages associated with the enterprise agreements for teaching and non-teaching staff combined with increased funding for enrolment growth, Commonwealth grants and funding related to new initiatives. The increase has been partially offset by reduced costs related to workers’ compensation insurance and superannuation due to a changing workforce profile.

Expenses for the Directorate totalled $780.8 million for 2017-18. As shown in Figure C1.3, the main component of expenses is employee expenses, including superannuation. 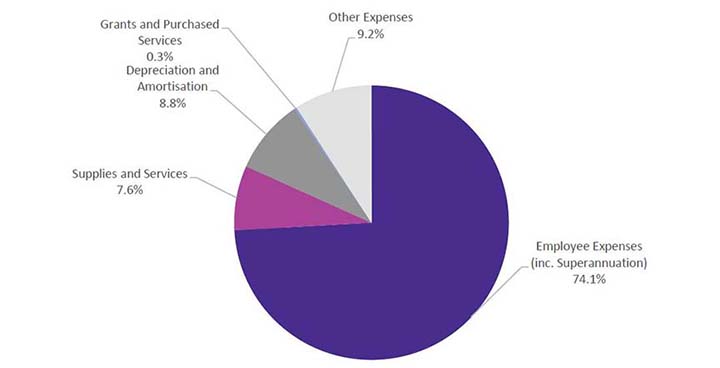 In 2017-18, total expenses of $780.8 million were $1.1 million or 0.1 percent lower than the original budget of $781.9 million which is materially in line. Higher expenditure related to additional employee costs associated with enrolment growth in ACT Public schools and repairs and maintenance, were more than offset by lower costs relating to workers compensation insurance and superannuation costs due to changing workforce profile.

Total expenses were $51.9 million higher than the previous year ($728.9 million). The increase primarily relates to additional employee expenses associated with enterprise agreements for teaching and non-teaching staff, enrolment growth and expenditure linked to new and cash funded initiatives, along with increased depreciation expense due to the flow on effect of the revaluation of the Directorate’s land and building assets late in 2016-17, and increased repairs and maintenance expenditure.

The Directorate held most of its assets in property, plant and equipment including capital works in progress.

In comparison to 30 June 2017, total assets increased by $18.6 million or 0.9 percent primarily due to the addition of capital works projects to the Directorate’s assets base.

At 30 June 2018, the Directorate’s liabilities totalled $167.7 million. This was $3.6 million or 2.2 percent higher than the amended budget of $164.1 million primarily due to an increase in capital works related creditors and employee benefits, offset by lower than anticipated revenue received in advance from International Private Students.

In comparison to 30 June 2017, total liabilities increased by $5.9 million or 3.7 percent primarily relating to an increase in employee benefits due to increased wage and salary related expenditure.

At 30 June 2018, the Directorate’s current assets ($79.7 million) were lower than its current liabilities ($151.8 million). The Directorate does not consider this as a liquidity risk as working capital needs are funded through appropriation from the ACT Government on a cash needs basis.

The Directorate’s current liabilities primarily relate to employee benefits, and while the majority are classified under a legal entitlement as current, the estimated amount payable within 12 months is significantly lower and can be met with current assets. In addition, in the event of high termination levels requiring significant payment for leave balances, the Directorate is able to meet its obligations by seeking additional appropriation under Section 16A of the Financial Management Act 1996.

Territorial Statement of Revenue and Expenses

Total income received included revenue for expenses on behalf of the Territory, primarily for the provision of grants to non-government schools.

When compared to the same period last year, total revenue increased by $23.4 million or 8.6 percent primarily due to higher levels of general recurrent grants for non‑government schools reflecting the impact of increased NERA SRS.

When compared to the same period last year, total expenses increased by $23.4 million or 8.6 percent primarily due to higher levels of general recurrent grants for non‑government schools reflecting the impact of increased Commonwealth and ACT Government grants in accordance with the NERA SRS.