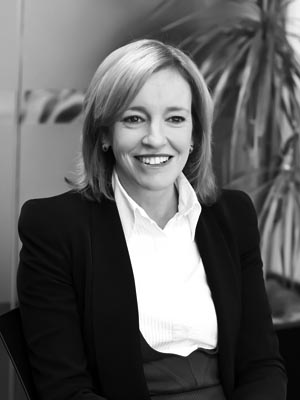 During 2011-12 the Education and Training Directorate undertook significant work to deliver on an ambitious local and national reform agenda. Our work over the last year, and in previous years, has enabled our ACT education and training system to be at the forefront of many initiatives.

I am pleased that this Annual Report 2011-2012 captures our achievements over the past 12 months, reports on our performance and articulates our vision for continuing to move forward.

I write this overview, having been recently appointed as Director-General of the Education and Training Directorate. I relish the opportunity to continue to work with our workforce, the ACT Government, stakeholders and the community, to shape policy to build on the achievements of the many people who have contributed over time to the success of the ACT education and training system.

My appointment follows the departure of former Director-General, Dr Jim Watterston. Upon his arrival to the Directorate, Dr Watterston outlined his vision for ACT education and training, through the release of the Education and Training Strategic Plan 2010-2013: Everyone matters. Dr Watterston worked collaboratively with colleagues to see the values of honesty, excellence, fairness and respect implemented and embedded across the Directorate. His leadership in ensuring students succeed through quality teaching that supports the development of capabilities for life is a continuing focus for the Directorate.

The Directorate also had a change in the ministerial arrangements during the financial year with Dr Chris Bourke MLA being appointed as Minister for Education and Training in November 2011, replacing Andrew Barr MLA. Minister Barr was Australia's longest serving Education Minister, having been appointed in 2006. Minister Barr now holds the roles of Deputy Chief Minister and Treasurer, among other portfolio responsibilities. I would like to thank Minister Barr for the leadership he provided to the education and training portfolio during his tenure. I would also like to thank Minister Bourke for the leadership and support he has provided to the Directorate since taking on the responsibility.

As well as contributing to social, cultural and academic outcomes, education and training has a significant role in driving the ACT economy. This highlights the need for every leader, every teacher, every school and every training organisation to be effective and to ensure all efforts impact on every young person in the ACT.

Teaching is a profession of incredible reward and of challenge. As educators we have the ability to shape, enrich and influence the lives of our young people. I have had this privilege as a teacher, principal and senior executive, including as Deputy Director-General of the Directorate since 2010.

The development of, and support for, people is central to my leadership philosophy. I believe that a culture of improvement, innovation and accountability within the Directorate, and across the ACT public service, is essential if we are to take collective responsibility for improving practice in our schools and for improving service delivery for the ACT community. It is vital that students leave our schools, and our higher education and training institutions, with expanded opportunities resulting from significant academic and personal growth. 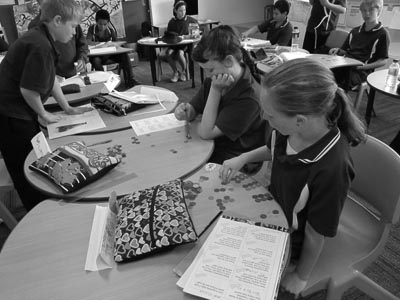 In building on the reform agenda, we have continued to place our children and learners of all ages at the centre of all we do. The focus of building a high quality learning system for all students in all settings remains. The success of our work is demonstrated by the continuing excellent results of the ACT education and training system.

In NAPLAN 2011 the ACT performed equal to, or better than, other jurisdictions in 18 of the 20 measures by domain and year level. In reading the ACT excelled, performing the highest in the country for all year levels and significantly ahead of the Australian mean. By year 9, on average, ACT students were effectively performing in reading one year ahead of their national peers.

Of the 4,214 Year 12 Certificates awarded in the ACT in 2011, nearly two-thirds of recipients received an Australian Tertiary Admission Rank (ATAR), with 77 percent of these students achieving an ATAR of at least 65, the cut-off for admission to a local university. 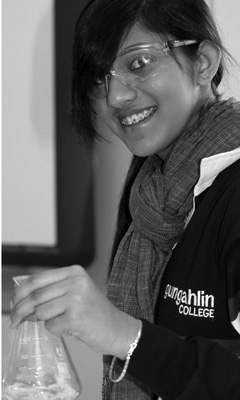 The ACT continues to have the nation's highest retention rate to year 12 and the highest proportion of 20-24 year-olds who have achieved a year 12 or equivalent qualification. These results are important to us all because of the clear link that exists between educational achievement and individual prosperity.

These excellent results reflect our commitment to providing our students with the highest quality educational opportunities. The Australian Curriculum is an important initiative in maintaining the strength of our system. During 2011-12, the ACT continued to lead the way nationally in the implementation of the Australian Curriculum, and in the development of new units within the curriculum.

In May 2011, the ACT Government signed the ACT Youth Commitment - a shared responsibility between the Directorate, business and the community to ensure that no young person in the ACT is lost from education, training or employment. To advance this commitment, four Re-engaging Youth Network Boards have been established to assist businesses, training providers, government and non-government agencies to work together to keep our young people engaged in education, training or work.

The implementation of reform in training and tertiary education continues both at the national level and in the ACT context. These reforms contribute to the economic future of the ACT and Australia through the delivery of a productive and highly skilled workforce. They will also further assist individuals of working age to develop the skills and qualifications needed to participate effectively in the workforce.

In 2011-12 the Directorate assisted the ACT Accreditation and Registration Council through a period of significant change and the transfer of responsibilities to the Australian Skills Quality Authority and the Tertiary Education Quality and Standards Agency.

During the year the Australian Government announced funding of $8.163 million for the establishment of the ACT Tuggeranong Sustainable Living Trade Training Centre. This Trade Training Centre will provide training and employment pathways in automotive, construction, horticulture and hospitality for students attending Tuggeranong public high schools and colleges.

In recognising the critical importance of our teachers and school leaders in achieving the positive outcomes described above, during the year a new Teachers' Enterprise Agreement was negotiated. The agreement includes an increase of nearly 15 percent for remuneration for most classroom teachers over the life of the agreement, a new career pathway for classroom teachers, accelerated incremental progression, reduced hours for first year teachers to support their professional development and enhanced support for school counsellors. The agreement represents a significant investment in education that values the professional status of teachers and principals in our public schools. 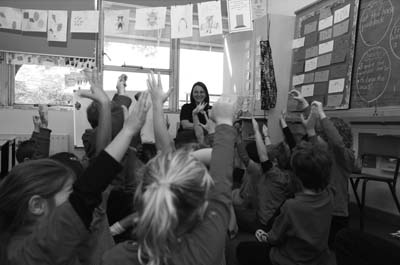 In 2012-13, we are continuing our important reform including a number of national partnerships in place or in development with the Australian Government. Examples include: empowering our local schools to give schools greater control over staffing profiles and greater transparency in financing; continuing to improve literacy and numeracy; providing more support for students with disability; and advancing the skills and workforce development reform agenda.

I am proud to lead a Directorate which continually strives for excellence and improvement and one which values honesty, excellence, fairness and respect. I look forward to continuing our work together to ensure all young people in the ACT learn, thrive and are equipped with the skills to lead fulfilling, productive and responsible lives. 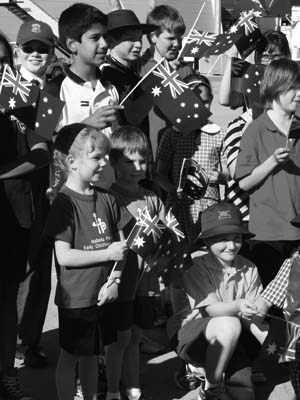 The anticipation was building as nearly 200 students representing all ACT public and non-government primary schools, including Jervis Bay School, waited for Her Majesty the Queen and His Royal Highness to touch down at Fairbairn Air Force Base in the afternoon of Wednesday 19 October 2011. A crowd of more than 500 including students, parents and carers, mingled with the press, military and dignitaries to welcome the Queen to Canberra.

The Queen, the Governor-General, the Prime Minister and the Chief Minister were all greeted by cheers and enthusiastic flag waving and returned the favour by taking their time to chat with many of those in the crowd. Jervis Bay students presented the Prime Minister with a toy dog that she promptly named 'Jervis'.

A lucky few had the special honour of personally presenting flowers and hand-made crowns to the Queen. This included Curtis, from Southern Cross Early Childhood School, who presented the Queen with a beautiful crown to which she responded, "Did you make this? It is lovely, thank you." 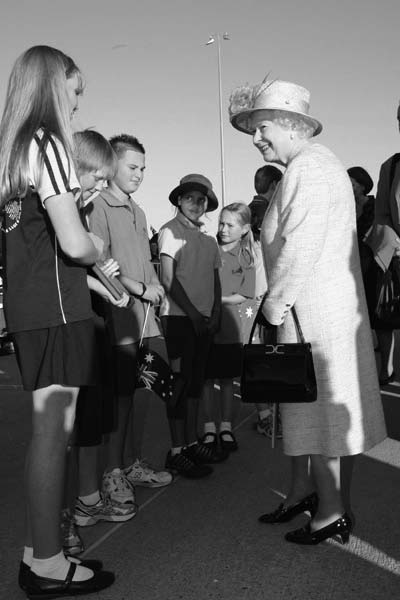