Our performance in summary

The Directorate performed very well in achieving its strategic priorities in 2011-12, including:

Our performance is discussed in more detail in Sections A8, A9, B and C.

The Directorate's vision, priorities and performance measures are expressed in the Strategic Plan 2010-2013: Everyone matters. Priorities in the Strategic Plan are derived from the higher level education and training objectives contained in The Canberra Plan: Towards Our Second Century and the associated underpinning plans. The Canberra Plan provides a basis for achievement against these important government objectives. The hierarchy of the Directorate's planning framework is presented in Figure A2.1. 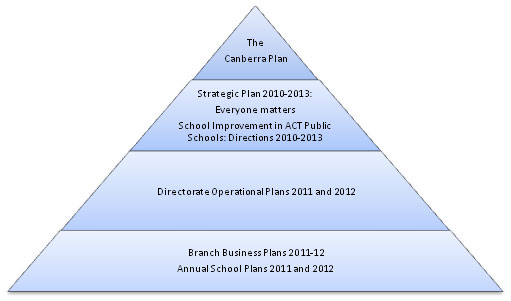 Our Strategic Plan is underpinned by key organisational planning documents. The work program for the period 2011-12 was contained in the operational plans for 2011 and 2012 which provided details of key priorities and activities for the Directorate for each of the calendar years.

More information on the Directorate's governance arrangements, including risk management and the audit program, is provided at Sections C1 to C5.

The Canberra Plan: Towards Our Second Century places the ACT school system in a forward looking context. With 'excellent education, quality teaching and skills development' being one of the plan's seven strategic themes, work undertaken by the Directorate is integral to achieving the plan's overall vision.

Underpinning the goal to be a sustainable and creative city is a need to be a clever city, with a well educated and appropriately skilled workforce. In 2011, the ACT Government established the Learning Capital Council to provide leadership on tertiary education and workforce development and to promote closer collaborations between education providers and stakeholders from industry and government. During the reporting period, the Learning Capital Council met three times to develop strategies to promote ACT tertiary education internationally and domestically. In 2011, 77 percent of our citizens between the ages of 25 and 64 years had a formal qualification. While this was above the national average, our aim is to increase this proportion even higher.

Our metropolitan status provides opportunities for efficient service delivery to the community. In December 2011, the ACT Chief Minister and the NSW Premier signed a memorandum of understanding to strengthen collaboration in planning and delivering essential services for regional development. Education was one of the priorities to progress for cross-border service provision. In addition, the Directorate has a service agreement with the NSW Department of Education to provide NAPLAN testing and marking services for all ACT students.

Through the National Education Agreement, the National Agreement for Skills and Workforce Development and associated National Partnerships, the Directorate worked with the Australian Government to translate and implement national policy into local practice. In particular, the Directorate maintained strong working relationships with the Department of Education, Employment and Workplace Relationships and the Department of Industry, Innovation, Science, Research and Tertiary Education.

The Directorate worked collaboratively with the Australian Curriculum, Assessment and Reporting Authority in the development of national curriculum and standards of achievement and the administration of national assessment and reporting programs.

The Directorate supported the work of the ACT Teacher Quality Institute and the Australian Institute for Teaching and School Leadership in the development of national professional standards for teachers and principals.

Box A2.1: Giralang Primary School and the Rats of Tobruk

The Directorate has a number of partnerships with community organisations to provide a broader learning experience to students. An example of this is the collaboration between Giralang Primary School and the Rats of Tobruk Association since 1999. The school is the custodian of the ceremonial banner of the Association. The school built a Memorial Wall in the front entrance to commemorate the Rats of Tobruk. Governor General of Australia, Her Excellency Ms Quentin Bryce AC CVO, unveiled stage one of the Memorial Wall at the 2012 ANZAC Assembly at the school.

The Directorate also works in alignment with the ACT Board of Senior Secondary Studies, the authority responsible for the certification of senior secondary school studies in public and non-government schools in the ACT.

In 2011-12, the Directorate assisted the ACT Accreditation and Registration Council (ARC) through a period of significant change. ARC was the statutory authority responsible for the accreditation and registration of VET and higher education courses and providers. During the reporting period, these responsibilities were transferred to Australian Skills Quality Authority (ASQA) and Tertiary Education Quality and Standards Agency (TEQSA).

To enhance the likelihood of successful student transitions through the school system and beyond, the Directorate has strong links with Canberra Institute of Technology (CIT), the Australian National University (ANU), the Australian Catholic University and the University of Canberra (UC). Collaboration with CIT delivered innovations such as the incorporation of Flexible Learning Centres in Gungahlin College. The ANU Secondary College Program is a collaboration between the Directorate and the ANU. The program provides advanced learning experiences and opportunities to year 11 and 12 students undertaking science subjects, including biology, chemistry, mathematics and physics. The program also offers Japanese language.

The partnership with the University of Canberra was further advanced with the establishment of the INSPIRE Centre. The INSPIRE Centre serves as a hub of excellence in ICT education. The centre facilitates research and promotes innovative use of ICT in school education among pre-service and in-service teachers.

The Directorate collaborates with other ACT government agencies to deliver on its priorities. In early childhood development, education and care programs, the Directorate works collaboratively with the Community Services (CSD) and Health Directorates. Collaboration with CSD is instrumental in the implementation of the Australian Early Development Index (AEDI) and in the development of early childhood education and care programs.

Box A2.2: Launch of the AEDI 2012 at Mount Rogers Primary School

On 1 May 2012, the national launch of the second data collection for the AEDI was held at Mount Rogers Primary School. The AEDI measures five key areas of young children's development: physical health and wellbeing, social competence, emotional maturity, language and cognitive skills, and communication skills and general knowledge. Nationally more than 7,500 public and non-government schools took part in the data collection. 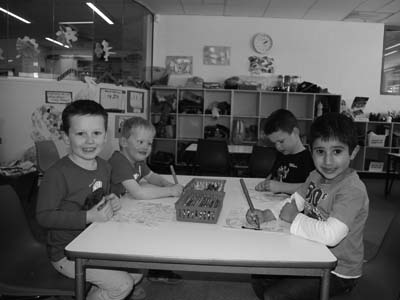 The Directorate has implemented a number of health initiatives in partnership with the Health Directorate. Notable are the School Youth Health Nurse Program, kindergarten health checks and nurses in ACT specialist schools.

Response to significant organisational change and revision to administrative arrangements

Dr Chris Bourke was appointed the Minister for Education and Training on
22 November 2011 replacing Mr Andrew Barr MLA. Mr Barr was the Minister from 2006 until the appointment of Dr Bourke in 2011.

Role in administration of legislation

Amendments and updates to the legislation are discussed in Section B4.