A9 Analysis of agency performance

The Directorate continued to work towards achieving strategic and operational priorities identified in the Strategic Plan 2010-2013 and the Operational Plans 2011 and 2012. There are four priority areas identified in the Strategic Plan, that are also reflected in the operational plans: Learning and Teaching; School Environment; Student Pathways and Transitions; and Leadership and Corporate Development. Significant progress was made in achieving outcomes against these priorities in 2011-12.

The outcome sought under the Learning and Teaching priority is to ensure students succeed through quality teaching that engages them and supports the development of capabilities for life. The Directorate identified the following four operational priorities: Implementing the Australian Curriculum; Raising standards in literacy and numeracy; Closing the learning achievement gap for Aboriginal and Torres Strait Islander students; and Strengthening early childhood education.

The Directorate led the way in implementing the Australian Curriculum.

The Directorate raised standards in literacy and numeracy. Students in years 3, 5, 7 and 9 at all ACT schools undertook tests in reading, writing, language conventions and numeracy in May 2011 for NAPLAN.

ACT students across all year levels and domains achieved mean scores higher than the Australian average. There were noticeable improvements from 2010 results in year 5 spelling, and grammar and punctuation, and year 7 spelling.

The ACT excelled in reading, performing the highest in the country for all year levels and ahead of the Australian average, a trend that has continued since 2008. Across all year levels the ACT had a greater percentage of students achieving in the top performance bands compared with the achievement in other jurisdictions. 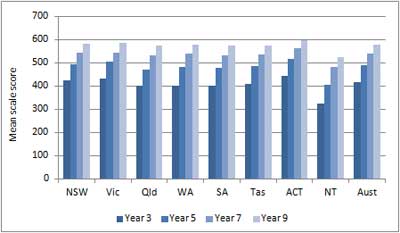 In numeracy the ACT, along with Victoria and New South Wales, had the highest mean score across all year levels. Between 95 and 97 percent of students in all year levels achieved at or above the national minimum standard. 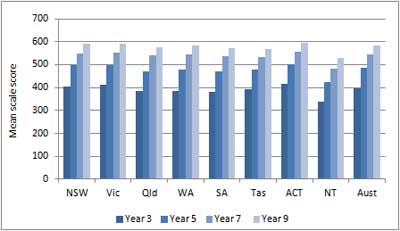 NAPLAN 2011 results confirmed that ACT students continued to be amongst the highest performing in Australia.

Figure A9.3: Mean scale scores of Aboriginal and Torres Strait Islander students in reading, writing and numeracy for years 3, 5, 7 and 9 in the ACT and Australia, NAPLAN 2011 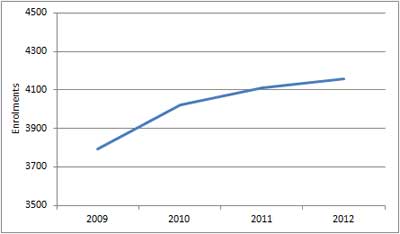 The ACT substantially exceeded the 2011 target of 94 percent of the proportion of children who were enrolled in and attending an early childhood education program.

The Directorate continued with the implementation of actions and priorities of the Excellence in Disability Education Strategic Plan 2010-2013 during the reporting period. The 2011-12 Budget provided an additional $20 million over four years to support initiatives for disability education under the Plan.

Individual Learning plans were in place for 97 percent of all students with disability. This was an increase from 95 percent in 2010 and in line with the Directorate's target.

Parents and carers of students attending specialist schools recorded higher levels of satisfaction in 2011 than in 2010. At 94 percent in 2011, this was an 11 percent increase from the result for 2010.

Feedback from the community on disability and special education programs and services was very positive with high levels of parent and carer satisfaction with their child's education in 2011.

The Directorate achieved the 1:1 student to computer ratio for all students in years 9 to 12 in 2010-11. To maintain the 1:1 ratio, 350 additional netbook computers were deployed in public schools during 2011-12.

ACT public schools adopted innovative approaches to promote environmental sustainability. Across ACT public schools, water consumption increased by 3.3 percent between 2010-11 and 2011-12. This reflected better water management practices within schools as well as the success of savings measures implemented centrally across the Directorate.

Harrison School's secondary facility was opened, providing the latest in information technology to support student learning and an inclusive setting for students with special needs.

ACT students in years 6 and 10 scored higher in the 2011 National Assessment Program – Information and Communication Technology Literacy than students nationally.

Attendance at school is essential for learning and for enabling students to benefit from the full range of educational programs offered at school. Attendance is an accepted indicator of student engagement. Student attendance rates for ACT public schools were reasonably stable in 2011, with changes of only one percentage point between 2009 and 2011. 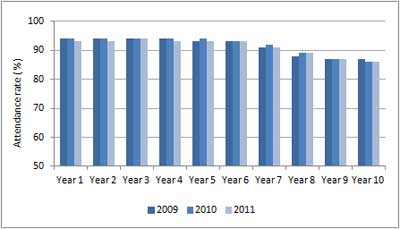 Other factors being constant, a high or increasing apparent retention rate suggests that a large number of students are continuing to participate in school education. The year 10 to 12 apparent retention rate for all ACT students increased between 2007 and 2011 and was significantly higher than the Australian rate. The rate for the ACT declined marginally from 2010 to 2011. 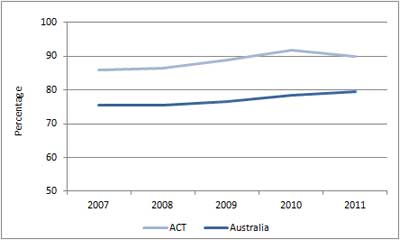 This objective in theStrategic Plan 2010-2013: Everyone mattersis focussed on providing learning pathways for students resulting in an educated and skilled workforce that meets the present and future needs of the ACT and region. There are four operational priorities under Student Pathways and Transitions: Improving secondary education in ACT public schools; Implementing training system enhancements for skills and workforce development; Monitoring students through the education system to appropriate and successful outcomes; and Supporting successful transitions for all students.

The Directorate has continued to prioritise the improvement of secondary education in ACT public schools through the implementation of a range of initiatives. The Excellence and Enterprise framework builds on successful aspects of the provision of local secondary education and broad learning and training choices and incorporates new initiatives to improve technologies, introduce more flexible structures and increase community partnerships.

The outcome of this was that in 2012 there was a 0.5 percent increase in enrolment of high school students in public schools.

Strong interest in the provision of public school year 11 and 12 education was affirmed with the February 2012 School Census showing a 1.4 percent increase in students attending public colleges. This continued the trend of increased enrolments over the previous three years.

Maintaining a high level of secondary education participation, the percentage of year 10 public school students who proceeded to public secondary college education increased from 89 percent in 2010 to 90 percent in 2011.

ACT public schools continued to show strong enrolments in years 11 and 12. Enrolments increased in years 7 to 10.

In 2011, the ACT continued to lead the nation with the highest proportion of the working age population (20-64 year olds) who had, or were studying towards, a non-school qualification (78 percent). This compared with the national average of 67 percent.

The ACT also had the highest proportion of the working age population with a non-school qualification at 72 percent compared with the national average of 62 percent.

In 2011, 60 percent of year 12 students received a nationally recognised vocational qualification, meeting the Directorate's target for this reporting period.

The ACT had the highest proportion of VET graduates with improved employment status in 2011 at 69 percent. This compared with the national average of 62 percent.

In the 12 months to December 2011, the number of apprentices and trainees in the ACT who cancelled or withdrew from their training contract decreased by four percent. This compared with a national increase in cancellations and withdrawals of six percent over the same period.

The ACT continued to lead the nation in the proportion of the working age population with a non-school qualification.

Priority 10: Monitoring students through the education system to appropriate and successful outcomes

The Directorate continued to undertake initiatives that resulted in a high proportion of students completing year 12 in 2011. Eighty-eight percent of year 12 public school students received a Year 12 Certificate, up from 87 percent in 2010.

Of those students who completed year 12 in 2011, 51 percent received a Tertiary Entrance Statement. This exceeded the Directorate's target of 50 percent.

The Directorate's survey of graduates is an important indicator of the success of the education system in delivering outcomes for students. The survey showed that 93 percent of public school students who completed year 12 in 2010, were employed or studying in 2011, an increase of two percent from the previous year.

The Youth Attainment and Transitions National Partnership (YAT NP), a bilateral agreement between the Directorate and the Australian Government, focussed on increasing the educational engagement and attainment of young people and improving their transition to post-school education, training and employment.

Under the participation measure in YAT NP, the ACT increased the number of young people participating in year 12 or an equivalent vocational education and training qualification by 420 students, well above the target in the YAT NP of 216.

The Directorate's continued support of VET in schools saw a 10 percent increase in Structured Workplace Learning placements from 2010 to 2011.

One ASBA student was awarded the 2011 ACT Aboriginal and Torres Strait Islander Student, Apprentice/Trainee of the Year.

The number of young people participating in year 12 or vocational education and training substantially increased.

The strategic objective under Leadership and Corporate Development is to support staff effectiveness and performance, in support of better outcomes for all students.

The empowering ACT schools (eACT) initiative aims to develop innovation and further improve teaching and learning through increased management at the local level. Principals have been given the information, tools and flexibility to better respond to local school community needs. The project supports the Australian Government's Empowering Local Schools National Partnership which is driving a similar agenda across the country.

ACT public schools were increasingly empowered through local and national initiatives to effectively respond to the learning and teaching needs of their school community at the local level.

The ACT continued to be a high performing public school system delivering on its focus of strong leadership and support to school communities.

In a survey of non-school staff in late 2011, 83 percent of staff were satisfied with their job overall.

The Directorate is committed to further developing and maintaining an ethical and respectful workplace that provides positive opportunities for employee contribution and career satisfaction.

To achieve these aims and in accordance with the Work Health and Safety Act 2011 (ACT) training sessions on Respectful Workplaces were attended by principals and central office managers and senior officers. A total of 20 training sessions were delivered to over 400 staff as part of the ongoing delivery of this training. The training forms the cornerstone of the Directorate's implementation of the Respect, Equity and Diversity (RED) Framework and its commitment to reducing the risk of psychological injuries in the workplace.

The continuing provision of training for RED contact officers resulted in the majority of schools having a contact officer able to facilitate information sessions for staff.

Over 85 percent of surveyed Directorate staff expressed satisfaction that their workplace reflected the values of the RED Framework.