The Director-General and other Directorate staff meet on a regular basis with the executive of the ACT Council of Parents and Citizens Associations, the Australian Education Union, the Catholic Education Office, the Association of Independent Schools and the ACT Principals' Association to discuss key issues and progress on major initiatives.

Community and education members representing significant stakeholder groups form the membership of both councils. The Directorate provides secretariat support for these councils including compilation of their annual reports which are annexed to this report.

The Group continued to meet regularly during 2011-12 and contributed to a number of policy directions including the Australian Curriculum, the Review of Funding for Schooling and the Plan. The Group held four community forums to provide information and receive feedback about local and national policies and programs. The Group also contributed to the design process of new schools to foster a culturally inclusive environment.

The Group participated in the 2011 Aboriginal and Torres Strait Islander Education Conference in Darwin. The conference presented a valuable opportunity for professional development, team building and to refine the focus of the Group.

The ACT Safe Schools Taskforce (the Taskforce) provides a forum to discuss concerns raised by stakeholders, the Minister and the community relating to school safety. The Taskforce continued to meet regularly during 2011-12 to discuss and develop innovative solutions to address ongoing and emerging school safety concerns.

The Taskforce is made up of representatives from the Directorate, the Catholic Education Office, ACT Association of Independent Schools, ACT Policing, the Youth Advisory Council, the ACT Principals' Association, unions, school parent associations, the Canberra Preschool Society and the Human Rights Commission.

Key achievements of the Taskforce included strengthening links with ACT Policing, advising on the nature of school safety audits and reviewing policies that provide guidance and direction to schools in promoting safe school environments.

The Taskforce supported the Directorate's 'It's a Matter of Respect' countering racism conference opened by Minister Bourke on 16 March 2012, as part of activities for the National Day of Action against Bullying and Violence. Teachers and students from public and non-government schools gained a greater understanding of the impact of racism and developed strategies to counter racism in schools.

The Disability Education Reference Group (DERG) is a community consultative forum convened by the Director-General. The DERG provides an opportunity for the community to formulate advice to the Directorate on the education of students with a disability in ACT public schools.

Membership of the DERG includes organisations representing principals, the Australian Education Union, parent associations and other government and community organisations involved in the support of people with disability and their families.

During the reporting period, the DERG provided feedback and guidance on the following:

During the reporting period, the Directorate undertook the development of an updated Reconciliation Action Plan (RAP) and revised terms of reference for the Aboriginal and Torres Strait Islander Education Consultative Group.

The Directorate consulted with the RAP Working Group and parents and carers of Aboriginal and Torres Strait Islander students to update the existing RAP. All participants (around 20) supported the revision and contributed to the updated RAP which builds on the work achieved during the implementation of the first RAP.

Consultation on engaging young people in education and training

The ACT Youth Commitment requires all agencies and providers to commit to ensure that all young people up to the age of 17 are engaged in education, training or employment.

The Directorate consulted with a wide range of stakeholders with 64 participants contributing to the development of the Re-engaging Youth Network Boards initiative. The initiative was launched on 28 May 2012 to engender a greater level of cooperation and collaboration across all providers and agencies in supporting young people who are disengaged, or at risk of disengaging, from education or training. One board has been established in each of the four school networks.

Membership of the boards is drawn from schools, government agencies, community organisations and youth service providers. Each board is chaired by a prominent member of the local business community.

The Directorate consulted with the community on VET options through quarterly VET Forums. The VET Forums provided opportunities for face-to-face engagement between Directorate staff and VET stakeholders in the ACT.

During the reporting period, the Directorate continued stakeholder consultation on the design for a number of new schools, new capital works at existing schools and on the projects funded under the Australian Government's Building the Education Revolution (BER) program.

Community partnerships are important to the social and economic sustainability of the ACT. Partnerships help schools to respond effectively to the educational needs and opportunities of their communities.

Capital Chemist Group awarded a scholarship of $500 to two students from each public high school for their demonstrated commitment to academic endeavour or citizenship during year 10 in 2011. The scholarship was given for continuing senior secondary education through a tertiary package or completing an apprenticeship.

Country Women's Association awarded grants of $350 to seven students commencing year 12 in 2012. The students (from public and non-government schools) were selected on the basis of their aptitude and commitment to completing their schooling in the face of challenges and hardships.

Paperchain Bookstore Manuka supported, through a contribution of $10,000, the 2011 Chief Minister's Reading Challenge. Prizes comprised book vouchers for winning and participating schools from public and non-government sectors. Paperchain Bookstore also supported the 2011 Year 10 Excellence Awards with a $5,000 contribution to the presentation event and $50 vouchers for each student award. 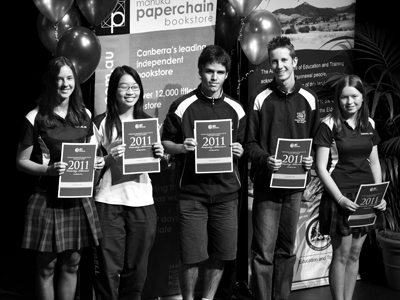 Paperchain Year 10 Excellence Awards for Outstanding Achievement in the High School Years were held on 5 December 2011. Awards were presented to students from ACT public high schools who excelled in academic work and extracurricular activities including peer mentoring, sports, state and national competitions and charity work.

The awards celebrated student growth as a learner, a person and a school and community member. The awards recognised the strength of students in ACT public schools and the excellence of the educators who work with them.

Paperchain Bookstore Manuka was the main sponsor of the awards.

Rotary Club of Canberra City (RCCC) manages and runs the Canberra Careers Market (CCM) every August. Through a memorandum of understanding, the Directorate assisted the RCCC with promoting, advertising and organising school visits to the CCM. In 2011, more than 7,000 students from the ACT and regional NSW visited the CCM held at the Australian Institute of Sport.

The ACT Training Excellence Awards is the premier VET community event in the ACT. The 2011 awards were held on 8 September to reward and recognise the outstanding achievements of apprentices, trainees, school students, employers, colleges, registered training organisations and industry within the VET sector. The Vikings Group continued its partnership with the Directorate by supporting the awards financially and through the provision of the venue and staff.

The Schools First program encourages best practice in school-community partnerships that demonstrate improved outcomes for students. Schools First is sponsored by the National Australia Bank along with the Foundation for Young Australians and the Australian Council for Educational Research. In 2011, four ACT public schools won awards for their ideas involving community partnerships.

Erindale College received a $50,000 Schools First Impact award for their Indigenous School-based Traineeship Program developed in partnership with the Indigenous community organisation, the Indigenous Social Inclusion Company. The program supported 17 students in 2011. All eight year 12 participants also completed their ACT Year 12 Certificate in 2011 and were employed or studying full-time in 2012.

The Schools First Seed Funding award worth $25,000 was shared between Lanyon High, Bonython Primary and Gordon Primary Schools for their 'Connecting through Giving' project in partnership with the Southern ACT Catchment Group (Kambah) and the University of Canberra. The partnership was developed to educate students from the schools about giving to the community, to the environment, to the school and to each other.

The ACT Refugee Day Committee presented scholarships of $250 to 13 students making good progress during their studies at the Directorate's Introductory English Centres or CIT. The scholarships were awarded to refugee students who were in need of financial assistance.

The Directorate continued to provide the community with updates on public school activities, programs and services through the ACT Public Schools Facebook page. Since the start of the page in mid-2009 the number of people who have nominated the Facebook page as part of their social network exceeded 600. A number of public schools used Facebook and Twitter social media sites to extend communication options with school communities. The Directorate's Twitter site followers numbered over 350 and the immediacy of the medium has proved useful in promoting school and Directorate events to specialist audiences including media.