The Human Rights Act 2004 commenced operation on 1 July 2004. Since then, public officials have been required to interpret agency-related legislation consistently with human rights unless Territory law clearly authorises otherwise.

Amendments to this Act came into force on 1 January 2009 and provided individuals with the right of action where human rights have been breached by a government agency.

Respect, Equity and Diversity Contact Officers (REDCOs) have been designated in each of the nine central office branches with more than 86 officers designated in schools and the central office. REDCOs provide information and raise awareness among staff about bullying, harassment and discrimination. REDCOs also support staff who feel that they may be experiencing bullying, harassment or discrimination in the workplace. REDCOs participate in ongoing quarterly network meetings and training sessions.

The Directorate's Respect, Equity and Diversity (RED) Consultative Committee met quarterly to provide strategic advice on equity and diversity issues. The Directorate is committed to reducing the risk of psychological injuries in the workplace as required under the Work Health and Safety Act 2011 and Workplace Health and Safety Strategic Plan 2008­­-2012.

A number of initiatives were implemented to support human rights education for staff.

The Directorate consults with the ACT Human Rights Commission in the preparation of cabinet submissions, including government submissions to the Legislative Assembly and in the development of new and amended legislation.

The ACT Human Rights Commission is an important external stakeholder and is consulted where policies and procedures that may have human rights implications are being reviewed or developed. 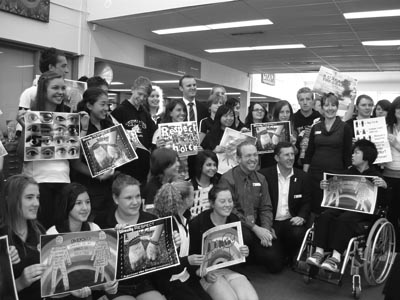 A group of staff and students from Stromlo High rallied together to battle homophobia and discrimination, and inspired a surge of action both interstate and in schools from across the capital.

The group, 'Diversity United', set up a 'safe space' in the school for lunchtime meetings designed to give students a place to work on homework, chat with each other and staff, access local services for under 25s, and have discussions about homophobia, diversity and respect within the school. Executive teacher Matthew Noonan said the response from students had been surprising to all.

"Even I was surprised when the students launched their meetings and plans, that some staff would also see it as a safe way to be themselves, to have the confidence to open up to others, and to be able to support students," Mr Noonan said. "Many teachers need to know they can talk, access resources, and be supported as much as our students! I have had interest from both ACT and interstate schools asking me to visit to share how we easily took the initiative to form working groups and action plans with staff and student leaders to create real support, change and education in our school. Now we have staff professional development programs in place, and new units for various classes which the students themselves led."

Classrooms are now decorated with anti-homophobia posters, teachers are being trained in supporting same-sex attracted youths and some students have drafted their own anti-discrimination videos.