In January 2010 the Directorate launched its Strategic Plan 2010-2013: Everyone matters. The Strategic Plan provides direction to the organisation, and informs its clients and stakeholders about key priorities. Specifically, the plan identifies four priority areas: learning and teaching; school environment; student pathways and transitions; and leadership and corporate development.

Under these priority areas performance indicators have been identified to allow for monitoring of progress over time.

Attainment of year 12 or equivalent qualification is recognised as a key to better employment outcomes and social inclusion. It is one of the three strategic targets identified by the Council of Australian Governments for education reform in Australia.

The proportion of the 20-24 year old population having attained at least a year 12 or equivalent qualification (Australian Qualifications Framework certificate II or above) is calculated as the number of 20-24 year olds that self-identify as having attained a year 12 or equivalent qualification divided by the estimated potential year 12 population (an estimate of a single year age group which could have attended year 12 that year, calculated as the estimated resident population aged 15-19 divided by five).

The proportion of the 20-24 year old population having attained at least a year 12 or equivalent qualification is obtained from the ABS Survey of Education and Work (SEW). The 2010 SEW was conducted in May 2010 with the results released in November 2010.

A data quality statement on this measure can be obtained from http://www.pc.gov.au/__data/assets/pdf_file/0016/103345/education-agreement-2009.pdf

The ACT has the highest proportion of year 12 attainment in Australia. Figure A8.1 shows that for the last three years, the ACT's proportion of 20-24 year olds who attained a year 12 or equivalent qualification remained higher (approximately 90%) than the national average (approximately 85%). 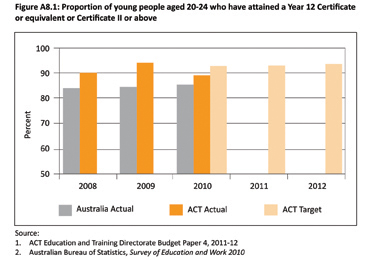 Year 12 completion is the number of students who meet the requirements of a Year 12 Certificate or equivalent expressed as a percentage of year 12 enrolments. Data is obtained from the Board of Senior Secondary Studies and the Directorate School Census in February.

Estimates are calculated based on the number of students completing the requirements of the ACT Year 12 Certificate divided by the number of year 12 students as per ACT School Census, February of the reference year.

Figure A8.2 shows that the ACT public school completion rate for year 12 was 87 percent in 2010, slightly below the target of 88.5 percent. To improve secondary schooling in the ACT, the Directorate has undertaken a number of activities, detailed in the Excellence and Enterprise publication released in May 2011. This will assist in engaging and retaining students to year 12 and increasing the completion rate. There is no comparable data at the national level. 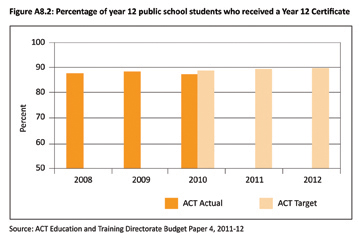 Attendance at school is essential for learning and for enabling students to benefit from the full range of educational programs offered at school.

Attendance is recorded for the first semester in the reporting year.

A data quality statement on this measure can be obtained from www.pc.gov.au/gsp/reports/rogs

The attendance rate of public school students from years 1 to 10 was 91.7 percent in 2010, compared with 91.4 percent in 2009 (Figure A8.3). The Directorate, through the School Improvement Framework, has set in place strategies to increase the attendance and engagement of students, particularly at high school and college.

The national attendance rate for public schools in 2009 (latest available data) was similar to the previous year at 91 percent, slightly lower than the ACT's attendance rate. 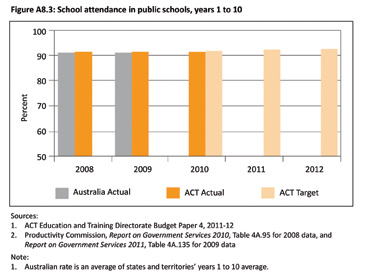 Student satisfaction is based on a survey of students from years 5 to 12 at ACT public schools, excluding students at specialist schools. The survey is conducted in May and June each year. Responses are sought from primary and high school students to 34 questions and to 36 questions for college students. The questions are grouped according to the four domains of school improvement: teaching and learning, leading and managing, student environment and community involvement, as well as a group of questions relating to overall satisfaction.

In determining overall student satisfaction, the question 'Overall I am satisfied I am getting a good education at this school' is used. Responses are collected on a five point scale with only statements of 'agree' or 'strongly agree' used to calculate overall satisfaction rates.

From 2008 to 2010, overall student satisfaction (across primary, high and college sectors) with the quality of the education received at public schools has remained around 80 percent (Figure A8.4). There is no nationally consistent comparative data. Destination data is based on a survey of graduates who successfully complete year 12 in the ACT. Graduates from the previous year are surveyed in May of the reference year.

The survey frame is drawn from the Board of Senior Secondary Studies administrative records and the population of interest is defined as those graduates who were awarded a Year 12 Certificate from an ACT college, school or the Canberra Institute of Technology. The population excludes graduates who are full-fee paying students and graduates whose usual residence was overseas. 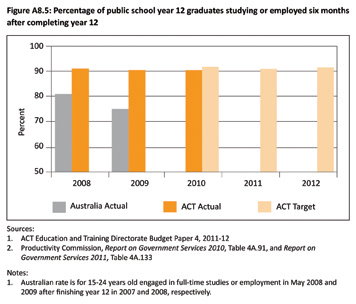 'To ensure that the Directorate is recognised as a responsive, innovative and high- achieving organisation that delivers on its commitments'

The satisfaction of parents and carers with education in public schools shows the confidence of stakeholders in the educational policies and performance of the Directorate.

Box A8.6: Parent and carer satisfaction

Parent and carer satisfaction is based on a survey of parents and carers of students attending ACT public schools. The survey is conducted in May and June each year. Responses are sought from parents and carers to 15 questions. The questions are grouped according to the four domains of school improvement: teaching and learning, leading and managing, student environment and community involvement, as well as a group of questions relating to overall satisfaction.

In determining overall parent and carer satisfaction, the question 'Overall I am satisfied with my child's education at this school' is used. Responses are collected on a five point scale with only statements of 'agree' or 'strongly agree' being used to calculate overall satisfaction rates. 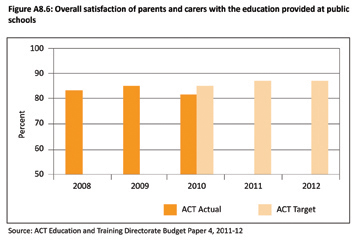 Staff retention is an indicator of the health of an organisation.

The staff retention rate is expressed as a percentage of all staff retained in the financial year.

The indicator is based on the headcount of all permanent school-based and office- based staff in all classification streams. Staff on long service leave are excluded from these counts.

The Directorate has historically maintained a high staff retention rate with 94 percent for 2010, slightly up from 2009 (Figure A8.7). This high retention rate indicates staff satisfaction with management and a commitment to achieving corporate goals. There is no nationally consistent comparative data. 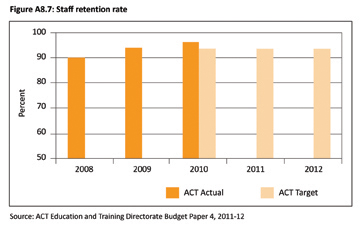