The Australian Sustainable Schools Initiative (AuSSI) is a partnership between the Australian Government and States and Territories to help schools achieve a sustainable future. In the ACT, AuSSI is managed by the Environment and Sustainable Development Directorate (ESDD) and is supported by the Directorate, ACT public schools and non-government schools. AuSSI is being implemented in 126 of the 128 ACT schools with 83 out of 84 public and 43 out of 44 non-government schools participating in the program.

The partnership previously developed between ESDD and the Directorate to conduct water audits and provide water efficiency reports to all ACT public schools was continued this year with 16 public schools receiving a water audit in 2010-11, bringing the total to 44 schools. Each of these schools was provided with a report recommending water saving initiatives based on the audit findings.

The sustainability handbook, 'What is a Sustainable School?' and Sustainability Action Kit, developed by the Directorate, were distributed to ACT schools in 2010-11. The handbook can be accessed on the Directorate's website. This assists school communities to identify opportunities to implement sustainable practices in their local environment. The Sustainability Action Kit contained four copies of the sustainability handbook, four posters, an electricity meter, a lux meter and a timer. The Directorate and AuSSI ACT will be working closely together in 2011-12 to provide all ACT public schools with assistance to develop a School Environmental Management Plan.

Water consumption
Water restrictions in the ACT eased significantly during 2010-11 with permanent water conservation measures now in place. Water consumption continued to decrease in the reporting period (over 30 percent in the two year period from 2008-09 to 2010-11), indicating the success of both water restrictions and water saving measures implemented in schools. 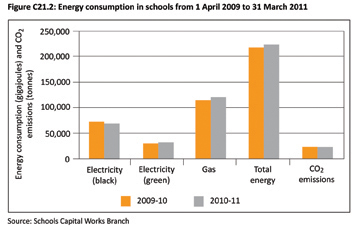 Energy consumption
All ACT public schools have now received an energy audit. Energy audits were conducted over the 2009-10 and 2010-11 financial years. The energy audits established baseline energy performance data and identified recommendations to improve the efficiency of each school and provided schools with an analysis of electricity consumption and site specific recommendations on how to reduce that consumption.

Electricity consumption across all schools decreased by 0.6 percent. However, gas consumption increased by 5.7 percent. The net result of this is a decrease in greenhouse gas emissions of 1.0 percent (calculated from the National Greenhouse Accounts Factors 2009 and 2010, Department of Climate Change).

In addition, a lighting audit was undertaken in 2010-11 to identify the schools and locations where less efficient light fittings are installed. Reducing energy consumption is an ongoing issue for schools and to this end lighting in all refurbished areas in ACT public schools was upgraded to energy efficient fittings as part of the standard program of capital upgrades.

Some ACT public schools, including Gungahlin College, Gold Creek and Kingsford Smith Schools, and Evatt, Gordon and Theodore Primary Schools, generate energy through solar panels. As these schools receive a feed-in tariff, carbon offsets do not accrue to the schools.

Resource efficiency measures
The Directorate is currently working towards the installation of smart meters for electricity, gas and water for all ACT public schools. The first round of smart meters at 19 schools will be installed in 2011-12. These smart meters will monitor resource use in real time and be connected to a web interface, allowing for greater management of energy and water resources and increased curriculum outcomes for all students.

Nineteen ACT public schools received grants in the 2010-11 funding round for the Australian Government's National Solar Schools Program. Schools will use the grants to install solar power generation systems and implement energy and water management improvements.

The Directorate established contracts with five solar installation companies to assist schools to install solar power generation systems at all ACT public schools, including the 19 schools approved in 2010-11. Pilot installations were completed at Evatt Primary School and Kingsford Smith School. Solar power systems will be progressively installed at other schools over the period: 1 July 2011 to 30 June 2013.

Additionally, the Directorate continues to install energy and water efficient infrastructure as part of school refurbishment and upgrade works. The initiatives implemented by the Directorate are contributing to ACT public schools being carbon neutral by 2017.

The following features aimed at reducing energy and water consumption were included in project designs:

New schools
Gungahlin College and Namadgi School opened at the start of the 2011 school. These schools are registered 5 Green Star Design Rated building projects and aim to provide enhanced occupant comfort while minimising the environmental footprint of the school campus. For example, the buildings at Gungahlin College feature a traffic light louvre system, allowing occupants to learn how to manage the louvre system for the most efficient operation of the building.

The information on a range of sustainability indicators for 2010-11 from four central office sites (Braddon, Stirling, Fyshwick and Higgins) is given in Table C21.1. It does not include school data.

The information in the table has been calculated using data provided by ActewAGL, Territory and Municipal Services Directorate, SITA Environmental Solutions, sgfleet, Recall, Thiess Services, Cleanaway and Corporate Express. The details for office greenhouse gas emissions and transport gas emissions have been calculated with the assistance of the ESDD.

The Directorate will participate in the Smart Office recycling program from 1 July 2011 to increase the levels of recycling at its primary central office site (220 Northbourne Avenue, Braddon). The program will increase the accuracy of measuring paper recycling levels.

The Directorate is working with the ESDD to develop its Resource Management Plan. This plan provides a basis for monitoring and evaluating resource efficiency measures against specific targets in relation to management of water, electricity, gas and transport fuel consumption, waste production and recycling, and greenhouse gas emissions. This will support the Directorate's compliance with the ACT Government Climate Change Strategy – Weathering the Change to reduce emissions by 40 percent from 1990 levels.

Table C21.1: Information on office-based sustainability indicators as at 30 June 2011