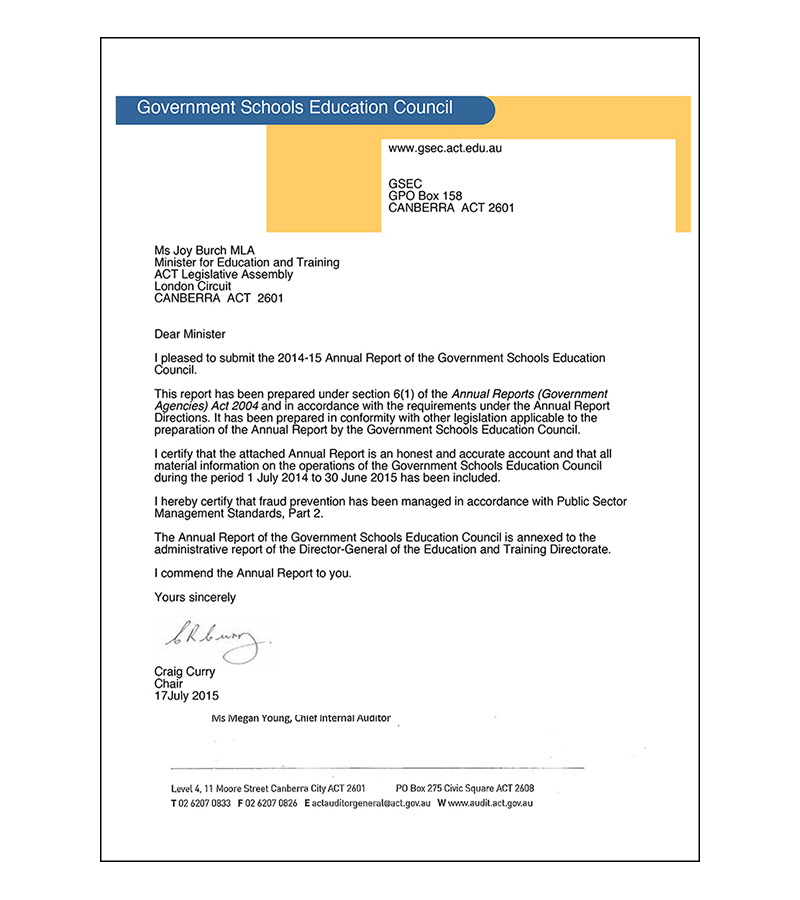 B. Organisation Overview and Performance

The Government Schools Education Council (the Council) is established in accordance with section 54 of the Education Act 2004 (the Act).

The Council identified the following goals to be achieved in the 2014-15 year:

The key issues considered by the Council in 2014-15 comprised:

The Minister for Education and Training met with the Council to provide a briefing on current national and local issues impacting on the ACT that the Minister wished to bring to the attention of the Council. The Minister responded to questions and feedback from Council members. The Minister also elaborated on her proposal to change the current educational advisory arrangements and establish a new body to provide expert advice on key issues relevant to three ACT school networks.

At the final meeting of the Council on 11 June 2015, members identified a number of issues relevant to the delivery of education they believe may be worthy of consideration in the future. These included:

The Education Act 2004 (the Act) outlines the conditions under which the Minister may appoint or terminate the appointment of a Council member. As a statutory appointment the Standing Committee on Education, Training and Youth Affairs is consulted on proposed appointments.

Sections 56 and 57 of the Act state that the Council must consist of the Director-General and the Minister must appoint the following members of the Council:

The Council met six times between 1 July 2014 and 30 June 2015 including a joint meeting with the Non-government Schools Education Council in October 2014, to discuss matters of mutual interest. The key issue examined was that of strategies for progressing parental engagement in learning within the ACT. The discussion was led by Dr Stacey Fox from the Australian Research Alliance for Children and Youth (ARACY).

The Council provided a submission to the Minister for consideration in the development of the 2015-16 ACT Government Budget. Given the challenging fiscal situation for the Territory, the Council put forward one recommendation:

During the reporting period the Council provided written feedback to the Education and Training directorate on the draft Bring Your Own Device Policy, the draft revised Safe and Supportive Schools Policy and the draft Reporting Student Achievement (Kindergarten - Year 12) Policy and the system reporting templates. The Council Chair attended the Board of Senior Secondary Studies Recognition of Excellence Ceremony to acknowledge the successes of ACT students graduating from public schools and the Round Table on Preventing Violence Against Women and Children. The Chair and other Council members also attended a number of briefings and official functions on behalf of the Council.

With regard to its legislated function - to advise the Minister on any aspect of ACT government education - during the reporting period the Council provided the Minister with comprehensive feedback and suggestions on: the draft Reporting Student Achievement (Kindergarten-Year 12) Policy and the system reporting templates; the promotion of public schools, including the branding and positioning initiative; and the Minister's position paper, Creation of an ACT School Education Advisory Committee. The Chair also met with the Minister on a number of occasions to update the Minister on the workings of the Council and to discuss current issue with the Minister.

The Council has no funds for which it is responsible, and therefore does not receive or expend funds.

The Education and Training Directorate (the Directorate) provides secretariat and advisory assistance to the Council. The Council may call on directorate staff to address Council meetings or meet with members to discuss particular issues or programs relevant to the work of the Council. If required, the Council would have access to legal advice through the ACT Government Solicitor's Office.

Council sought and received updates from the Directorate on:

All new members are provided with the ACT Government Boards and Committees Code of Conduct and asked to sign a Code of Conduct/Conflict of Interest Declaration Form. These documents outline expectations regarding ethical behaviour in order to satisfy standards of probity and accountability that apply to the public sector. These documents also provide information to assist members in identifying, avoiding and disclosing potential conflicts of interest.

B.4 and B.5 Risk Management and Internal Audit

Council operations are regarded as low risk and the Chair has put processes in place to monitor identified risks. No risk mitigation activities have been required.

For more information contact the Chairperson or the secretariat for the Government Schools Education Council (GSEC):