The Directorate performed very well in achieving its strategic priorities in 2010-11. Some strategic achievements included:

Our performance is discussed in detail in Sections A8, A9, B and C.

The Directorate's vision, priorities and performance measures are expressed in the Strategic Plan 2010-2013: Everyone matters. Priorities in the Strategic Plan are derived from the higher level education and training objectives contained in the Canberra Plan and the associated underpinning plans – the Social, Spatial, Economic and Climate plans. The Canberra Plan provides a basis for achievement against these important government objectives. The hierarchy of the Directorate's planning framework is presented in Figure A2.1. 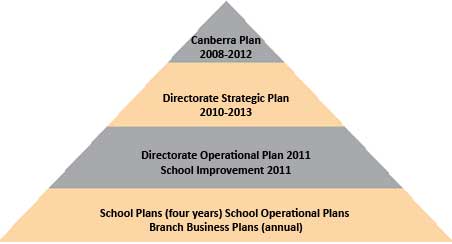 Our Strategic Plan is underpinned by key organisational planning documents. The work program for the period 2010-11 was contained in the Operational Plan. The Operational Plan provides details of key priorities and activities for the Directorate on an annual basis.

More information on the Directorate's governance arrangements including risk management and audit program is provided at Sections C1 to C5.

The Canberra Plan: Towards Our Second Century places the ACT school system in a forward looking context. With ‘excellent education, quality teaching and skills development’ being one of the plan’s seven strategic themes, the Directorate is an integral player in achieving the city’s overall vision to be both sustainable and creative.

We benefit from being geographically small in size. Our urban nature is almost entirely metropolitan. Being located within the state of NSW creates opportunities for partnership. Canberra’s status as the nation’s capital adds a significant global flavour with our educational institutions delivering services to over 7,000 international students in any one year.

Underpinning our desire to be a sustainable and creative city is a need to also be a clever city, with a well educated and appropriately skilled workforce. Currently around 71 percent of our citizens between the ages of 25 and 64 years have a post- school qualification. Whilst this is above the national average our ambition is to increase this number.

Through the National Education Agreement and associated National Partnerships, the Directorate works closely with the Department of Education, Employment and Workplace Relations to translate and implement national policy into local practice. The creation of the Australian Curriculum, Assessment and Reporting Authority (ACARA) has fulfilled an important role in the development of a national approach to curriculum and assessment. The Directorate works closely with ACARA to support the rollout of the Australian Curriculum.

The Directorate ensures that, through the Government Schools Education Council and the Non-government Schools Education Council, ACT schools are supported by an effective governance structure. The Education Act 2004 requires that each public school has a school board as a way of sharing authority between the Directorate, the school and the local school community. The role of boards includes establishing the strategic direction and priorities for the school and developing strong relationships between the school and the community.

The Directorate works closely with other ACT government agencies to deliver on its priorities. To deliver full service programs related to early childhood development, education and care, the Directorate works collaboratively with the ACT Health and Community Services Directorates. Amongst other outcomes, this has led to the opening of Child and Family Centres and the expansion of the Maternal and Child Health program.

To increase the likelihood of successful student transitions through the school system and beyond, the Directorate has collaborated with the Canberra Institute of Technology (CIT) and the University of Canberra. Collaboration with CIT has delivered innovations such as the incorporation of Flexible Learning Centres in the new Gungahlin College. A partnership between the Directorate and the University of Canberra involved activities and initiatives towards achieving the shared vision for public schools and tertiary education. In recognition of the partnership, two public schools have been renamed:

To plan for future schooling needs and advise on appropriate use of land adjacent to school environments, the Directorate, through the School Planning Committee, maintains a close working relationship with the ACT Environment and Sustainable Development Directorate (formerly ACT Planning and Land Authority). Amongst other outcomes, this has supported the implementation of the school renewal program that has delivered new schools and colleges with state-of-the-art technologies, linked to the public library service and serving a range of other community needs.

The Directorate seeks opportunities for collaboration with other jurisdictions to deliver benefits to the ACT. Through service agreements and memoranda of understandings the ACT has negotiated arrangements addressing the curriculum, assessment and professional development needs of its teaching workforce. For example, the NSW Department of Education provides NAPLAN testing and marking services for all ACT students.